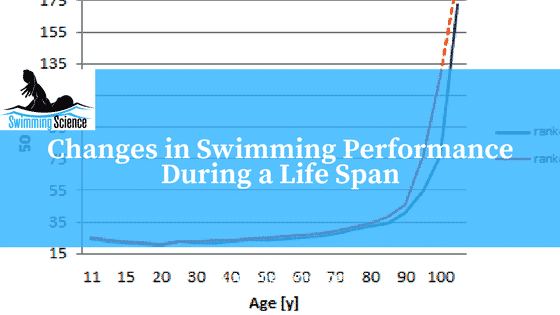 History was made in last January 24th, 2014. It was in Winnipeg (Canada) that Jaring Timmerman became the first master swimmer to compete in the 105-109 category. Timmerman raced the men 50 back and 50 free at the Catherine Kerr SCM Pentathlon (CBS News, 2014).
Master swimming competitions exist for a long time but lately has become very popular around the world. Besides that, several former elite swimmers after ending their top-level careers shift to master competitions. So, master swimmers can be fitness-oriented people but a lot of them are still performance-driven folks.
Nevertheless, how swimming performance changes throughout lifespan? What are the limits of human performance at a given age span (childhood, adulthood, elderhood) when it comes to competitive swimming?
The aim was to describe the changes in swimming performance during lifespan (i.e. cross-sectional design, including age-group, elite and master swimmers). The men 50 SCM freestyle races were selected so that Timmerman’s recent achievement could be part of this analysis. US age-group top-10 LCM times, between 11 and 18 years-old were retrieved from a database (www.usaswimming.org) and then converted to SCM. FINA all-time top-10 (i.e. elite swimmers) and FINA all-time master top-10 were retrieved from another database (www.fina.org).
Probably there is an overlap between ages for a few elite swimmers (i.e. 20-25 years old) and the first master’s categories (e.g., 25-30 years old). E.g., at the Beijing OG, the participants in the 50 free had on average 22.99±4.51 years-old and at least half of them more than 22.62 years-old (i.e. Median = 22.62-y; 27 swimmers were older than 25-y) (Barbosa et al., 2012). Category 100-104 only has 3 swimmers, while category 105-109 none, but I added Timmerman’s time. After modeling the performance-age data for swimmers ranked in 10th place and getting the fitting curve, the performance for a hypothetical swimmer was extrapolated.
There is an improvement in performance during childhood (11-20 years old), a steady impairment during middle-age (around 25/30 to 60/65 years-old) and an exponential increase in final time during elderhood (around 65/70 years-old) (Figure 1). Hence, there is a non-linear impairment on performance with increasing age for master swimmers. 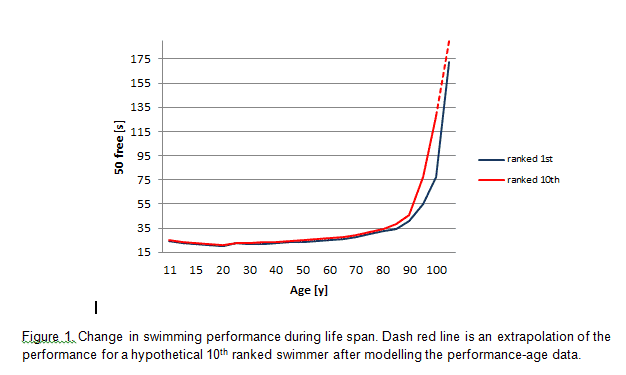 Now let’s analyze these variations by different age spans. Between childhood and young adulthood, the curves have a similar shape to what was reported in the literature for sub-elite swimmers (Barbosa, 2012). With no surprise the difference between the swimmers ranked in 1st and 10th place during the career peak (i.e. elite swimmers) is very slim (Figure 2). On the other hand, the gap is wide for age-group swimmers and master counterparts. For the case of age-group swimmers, we can see that the gap starts to narrow at the age of 15-16 years-old. Master performances tend to impair and the gap between 1st and 10th ranked swimmer increases over time. Interestingly the swimmer ranked 1st in the category 35-39 holds a World Record with a better time than the previous category (30-34). The 35-39 record holder is Mark Foster (GBR), former Olympic swimmer, European and World Championships medalist that clocked 21.53s on the 27 October  2007.
Regarding elderhood, there is a sharp increase in the final race time but the inflection point seems to be more obvious at the age of 90 years-old (Figure 3). Performance impairment is coupled with the decline of several physiologic systems (that starts in the 30’s) and a decrease in the external training load (i.e., number of sessions per week, volume, intensity, etc.). The changes in the physiological systems explain the decline of both endurance and anaerobic performances. Anaerobic performance is dependent upon a number of factors including total muscle mass, muscle fiber type, and size, muscle architecture, and strength, substrate availability, efficiency of metabolic pathways, accumulation of reaction products, aerobic energy system contribution (Reaburn and Dascombe, 2008). Performance in endurance events is dependent upon maximal oxygen consumption, maximal heart rate, stroke volume, lactate threshold, the economy of movement, muscle fiber type, morphology and capillarization, aerobic enzyme activity (Reaburn and Dascombe, 2008).

Read more on swimming performance and aging with

By Tiago M. Barbosa that earned a PhD degree in Sport Sciences and holds a faculty position at the Nanyang Technological University, Singapore.