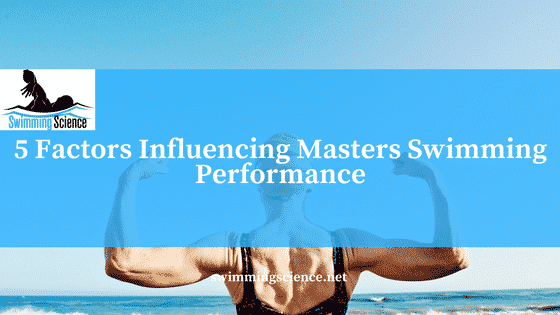 Dr. Barbosa examined performance changes throughout the swimming lifespan. In this post, we’ll complement that topic focusing on the masters swimming literature. Note, Dr. Barbosa recently published a study on the role of biomechanics in masters swimmers.

Masters swimming is a world unto itself, with different demands than youth, age group, college, and professional swimming.  Whereas younger swimmers have time on their side and biology to accelerate development, masters swimmers face different challenges.  In this post, we’ll explore the literature documenting factors affecting masters swimming performance.  Certainly, some traits (stroke mechanics, conditioning) will affect all swimmers, but some biological forces are unique to the masters population.

Physical qualities may distinguish between relatively homogenous groups of swimmers.  While some qualities are not modifiable (you can’t go back in time and build a giant base if you never had that experience), knowledge of certain traits may guide the training process.  Zampagni (2006) sampled 136 elite masters and 125 non-elite swimmers and found that age, height, and hand grip strength were the best predictors in short-distance events, whereas only age and height were predictors in middle- and long-distance events in both elite and non-elite masters swimmers.  You obviously can’t modify age, but you can affect hand grip strength, whether directly or indirectly if handgrip strength is a proxy for neural drive.

Age would seem to be an obvious factor, but how does it affect performance?  As a general rule, “The decline in performance among national champion swimmers, both men and women and in short and long swims, is linear, at about 0.6% per year up to age 70-75, after which it accelerates in quadratic fashion” (Rubin 2013).  Fairbrother (2007) noted a similar progression studying freestyle distance competitors at national championships, with the most extreme declines occurring after age 70.
In a similar study, examining masters sprinters, Fairbrother (2007) noted that first place finishers exhibited a more gradual increase in time (slowing down) with age than did those closer to tenth place.  It’s unclear if the champions trained differently than the other competitors or if other health factors or genetics aided their ability to sustain performance.

Another factor affecting championship performance is where the swimmer stands within their age group.  Whereas older swimmers have an advantage in the two year age brackets of age group swimming, younger swimmers have the advantage in the masters community.  Medic (2011)noted, “the odds of a Masters swimmer participating in the championship during the first constituent year of any 5-year age category was more than two times greater than the odds of that athlete participating during the fifth constituent year.”  In fact, I recall one of my former teams in which one swimmer made several record attempts at morning practice in the first two weeks after a birthday aged her into the next age group!  As swimmers reach the higher age groups, we’d expect five year age differences to be magnified even further.

High volume versus high intensity is an ongoing debate, with modern research suggesting the value of high-intensity training. As they note, some studies have suggested that overall training intensity may be more important than training volume for improving masters swimming performance. However, these studies were focused on very young subjects and/or the difference between high-volume and high-intensity training was blurred.

The most recent study (Pugliese 2015) applied a blocked periodization model to a group of masters swimmers. Now, masters swimming often lacks formal periodization, with many swimmers content to follow the same week-to-week routine throughout the calendar year. That’s not a critique of masters coaching, it is simply a fact of the culture, which is much different than the age group world. Periodization in masters swimming is often built more around kids’ school calendars, vacations, and triathlon season than optimizing master swimming performance.

What does this study contribute? First, as authors note, a period of reduced volume and higher intensity can enhance sprint performance after a high volume base period. Likewise, it can sustain fitness for middle distance events after a lower intensity/higher volume base period. Generally, this research is consistent with the seminal work by Neufer (1987) and Costill (1991) in this area.

More practically, this is also a reminder to masters swimmers that even if commitments outside the pool force you away from your normal training regime, a low volume-high intensity regime can maintain your fitness so that you can resume quality training at a similar level in the future.

One weakness in this study is a lack of a control group. Yes, swimmers improved in the second condition (lower volume, higher intensity), but might they have also improved had they stayed on the same training program as the first six weeks? We simply don’t know that answer. Further, it is possible that middle and long distance master swimming performance would have been improved in the low volume-high intensity condition with a shorter taper period.

Overall, this research confirms what most would intuitively suspect. Most important is that we have more data on periodization in a masters population, which is lacking the research depth of age group swimming. Though cultural factors often make periodization difficult to apply in a masters setting, know that manipulating the schedule is one way to achieve gains in this setting.