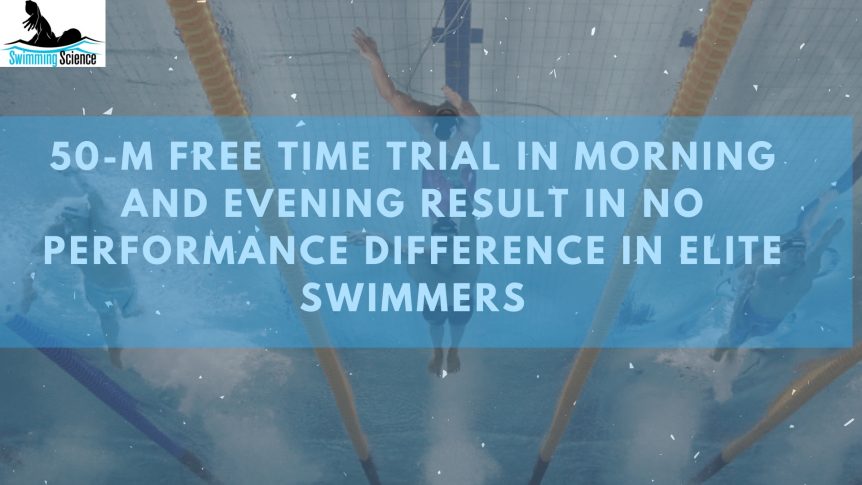 Based on the circadian rhythms of hormone levels, gene expression, and core body temperature, it could be expected that the best performance in terms of strength, flexibility, alertness, and anaerobic power output occurs in the late afternoon.

Thus, intraday comparisons could be a better approach as a measure of the circadian rhythm effects, at which experimentally
well-controlled evidences are still missing.

Circadian rhythms are internally generated phenomena with periodicity of 24 hours. In humans, circadian rhythms originate from an endogenous pacemaker located in the suprachiasmatic nucleus.

Stroke rate has been determined as a key factor of performance for the 50-m distance compared with other swimming distances. Indeed, in a previous study, the best 50-m swimming performance was associated with a smaller SL and a higher SR in trials conducted at 6 PM vs. those performed at 8 AM, confirming that time of the day (i.e., circadian rhythm) may influence the swimming kinematics.

To determine whether time of day may impact 50-m swimming performance, 2 successive 50-m were performed.

Eleven male competitive swimmers (range: 17–27 years) who were specialists in both 50-m and 100-m front crawl event participated in this study. Based on their answers to the Horne and Ostberg self-assessment questionnaire measuring “morningness” and “eveningness” in human circadian rhythms, all 11 subjects were identified either as “moderately morning types” (n = 1, i.e., 9%) or as neither type (n = 10, i.e., 91%).

Interestingly, performance in two 50-m swimming trials separated by 7 hours was not influenced by time of the day.

Therefore, a warm-up effect could partially explain the absence of significant differences between morning and afternoon trials. Furthermore, the swimmers involved in this study habitually trained twice a day, in the morning and afternoon. Hence, a large percent (91%) of the participants were identified as neither type through Horne and Ostberg self-assessment questionnaire.

This chronotype profile of the swimmers could also explain the results of this study.

Higher values of SR and lower values of SL were observed at 10 AM. These findings disagree with a previous study that reported lower SR and longer performance time during morning trials.

Because some swimmers may encounter difficulties in swimming at or near best performance during morning heats, 50-m swimming performance can be held around 10 AM and 5 PM, with no changes in performance in swimmers with neutral Horne and Ostberg self-assessment results.

Future studies should look at swimmers without a neutral Horne and Ostberg score and/or those who don’t practice twice a day. It would also be interesting to look at swimming time trials much earlier and later (~6 am and or 7 pm, for example).