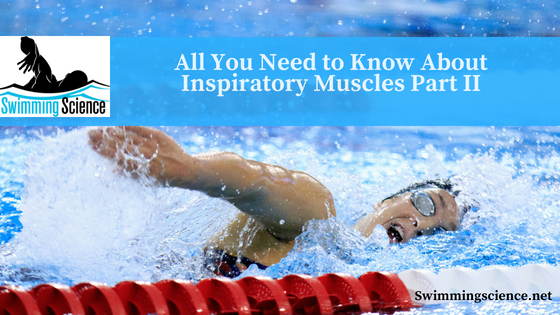 In part I, I covered the exciting topic of breathing biomechanics and muscles associated with inspiration. These are the muscles noted with fatigue in swimming. Even though the last batch was the popular group to study, it is essential to know the other muscles involved in breathing and how to improve both forms of breathing. Now it is time to get into muscles used during relaxed and forced expiration and the research on inspiratory muscle fatigue and swimming, don’t worry no statistician degree is needed.
Relaxed Expiration
As discussed in part I, the diaphragm is the main respiratory muscle. As the diaphragm contracts during relaxed inspiration, the lungs recoil back to their original position without any muscle contraction.  This is why breathing is considered an autonomous activity, it requires no thought, the body simply breathes….easy enough! The lungs are just like a like a balloon if you blow up a balloon the outsides are stretched and forced to expand, but if you let out air, the balloon will recoil to its original position without any assistance.
Forced Expiration
Unlike relaxed expiration, forced expiration requires muscle activation.  Last weeks post on forced inspiration discussed a lot of foreign muscles, now let’s talk about forced expiration and a few familiar muscle groups and a few you wouldn’t expect…kegel’s baby!
If the repeatedness didn’t convey the message, these muscles are typically responsible for breathing while the pelvis and spine are fixed, stable, and stationary. This is essential and underutilized in studies which solely look at improving forced inspiration. A lot of the studies below only looked at inspiration, not looking at core stabilization, anatomy, or expiration. As you’ll see in later posts, these factors are essential for optimal breathing.
Stats and Hypotheses
A lot of recent research has looked at inspiratory muscle training and inspiratory muscle fatigue and swimming performance.
Even our deep sea diving cousins have shown improved inspiratory muscle endurance with longer time to fatigue
These studies have used various mechanisms to increase inspiratory muscle strength and found variable results. It is clear that swimming induces respiratory fatigue, but the main question remains, if swimming improves total lung capacity and forced expiratory volume (Mickelborough 2008), will additional inspirational training improve performance? Also, are the methods being used in these limited trials adequate to yield changes in elite athletes? I personally feel training these means will improve performance, but these studies have not been able to perform proper training.
I feel strengthening the diaphragm and methods where core contraction with relaxed and forced respiration need to be studied and could truly enhance inspiratory strength.  Remember, relaxed breathing should be autonomous and not call on every muscle in the body, so if you can don’t utilize your primary respiratory muscles (diaphragm and intercostals), then you are fatiguing your secondary respiratory muscles, advocating the “cheater” muscles activity. Many athletes need to start simple, learning how to utilize the primary respiratory muscles with relaxed breathing, not allowing the cheaters to come around and or we’ll have Joey Greco take care of them!
If one of the major breathing muscles (i.e. diaphragm) is not working properly the other muscles kick in and have to increase work. During forced respiration (athletic activities), if the primary respiratory muscles are not involved, one will be vulnerable to more injuries and stress on unnecessary structures. For example, if your diaphragm is inadequate, so your swimmer body calls on your well-developed lats, pecs, and traps to breathe, then these muscles will fatigue sooner, decreasing your swimming speed!
Round-up
With all the boring stuff out of the way, we can tackle how to screen breathing and methods to improve both inspiratory and expiratory muscles under maximal conditions.