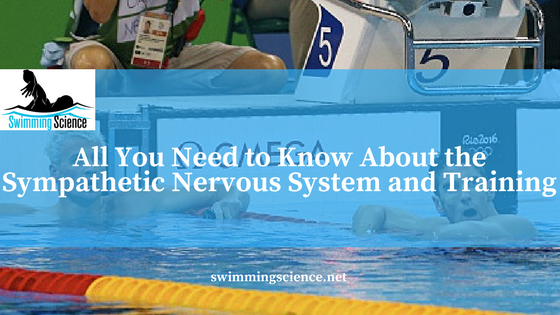 Overload and overreaching is common in swimming. During these periods, the nervous system undergoes high levels of stress. Luckily, there are top researchers looking into the influence of training on the nervous system.
This interview with PhD (c) in human performance and health research, Alexandra Coates (see her info and past research here). Alexandra is a former competitive swimmer and elite triathlete. Her and her team at the University of Guelph recently published a study:
Her Twitter is superalex_c and Dr. Burr's Twitter is @Dr_Burr.

1). What is the sympathetic nervous system?

As mentioned, there needs to be a balance between the parasympathetic and sympathetic arms of the autonomic nervous system to maintain health and bodily functions. In general, greater parasympathetic tone at rest is healthier.  Greater sympathetic activity at rest is usually associated with diseased states, low fitness, or obesity. That said, we require the sympathetic nervous system to kick in when we exercise in order to raise our heart rate and stroke volume to ensure oxygen delivery to the brain, muscles, and skin, and to redirect blood flow to where it is needed. Other influences that will greatly increase sympathetic activity include stressful mental states (work, school, taking tests), and some sympathomimetic drugs such as phenylephrine and pseudoephedrine (found in many cold medicines). Caffeine also indirectly acts to increase sympathetic activity.

3). What is the most precise way to measure the sympathetic nervous system?

4) What is the most precise, but easiest way (things swimmers or coaches could use) to measure the sympathetic nervous system?

The only way to assess the autonomic nervous system on a day-to-day basis (without a lab), is through heart rate measures -  particularly heart rate variability (HRV). As I mentioned previously, the use of heart rate variability is primarily an assessment of parasympathetic activity. That said, increased HRV (variability in time between each heart beat) usually means there is a more dynamic interplay between the parasympathetic and sympathetic nervous systems, which is healthy and good. The flipside, low HRV, usually means there is sympathetic dominance, which is not typically seen as “good”, however athletes may have an increase in sympathetic activity leading into races (think readiness/nervousness), and will have great races (see Plews et al., 2013 for more info). As you can see, HRV is not as easy and simple to interpret as some people believe. That said, if you are going to track your daily HRV, the general consensus in the literature is that you cannot make decisions on a day-to-day basis using HRV, but rather on a weekly-average basis. Secondly, you should take into account your waking heart rate as well as your HRV, as you may have a very low HRV and a very low resting HR, which would indicate parasympathetic dominance (rather than sympathetic), and could also denote  either parasympathetic saturation or very high levels of fatigue. In that case, using subjective fatigue (mood states etc.) would help you to determine if the athlete is extremely fatigued, or just has a lot of parasympathetic activity (like I said, it gets complicated).

5). Swimmers are known for early morning practices. How does sleep reduction influence the sympathetic nervous system?

The literature is a little mixed in regards to sleep reductions and sympathetic activity. It is known that patients with sleep apnea (which may occur in athletes training at altitude) have increased sympathetic tone. It is also demonstrated that sleep disruptions typically increase central sympathetic activity, but not always (it appears to depend on the type and length of sleep deprivation). Other issues with sleep deprivation, however, include decreased growth hormone release which is very important for recovery and adaptations to training, decreased glucose metabolism (very important for performance in training and recovery), and increased inflammation and illness.

6). How does overreaching influence the sympathetic nervous system?

In my study, we saw an increase in sympathetic activity with overreaching (moderate overtraining). We performed a 3-week overload protocol, in which participants trained at ~150% of their regular volume. It was essentially a 3-week training camp. We also saw that while our regularly training control group increased their performance, and also had an increase in baroreflex sensitivity (meaning improved sensitivity to blood pressure changes) and heart rate variability (a good thing!), the overreached group had a decrease in performance and no improvements to their baroreflex sensitivity or heart rate variability.

7). How does overtraining influence the sympathetic nervous system?

Overtraining is defined as the process of increasing your training load, and is used as a verb. Acute fatigue occurs with overtraining, but you should still be able to maintain your performance. Functional overreaching is when you push past the “acute fatigue” phase, and begin to see decrements to your performance. With sufficient rest you should bounce back, and ideally see a super-compensation within a week or two of recovery. This is the phase along the “overtraining spectrum” that I was aiming for with my study. With non-functional overreaching, you continue to train through functional overreaching, and as such it will take weeks to months before you fully recover (and because of that prolonged recovery period, you will not see an improvement to performance). Lastly there is overtraining syndrome, which is not only driven by increased training and insufficient recovery, but also other stressors or illnesses. Recovering from overtraining syndrome is very difficult, and most athletes cannot recover from it in order to return to competition. So to answer the question of how does overtraining influence the sympathetic nervous system, it depends on the length of overtraining that you refer to. As I mentioned, the regular overtraining you see from training camps will likely increase sympathetic activity (at least according to my findings), however further down the line (into non-functional overreaching and overtraining syndrome) there is evidence for sympathetic suppression or exhaustion. More research is needed, but essentially you don’t want to push too far down the overtraining spectrum as you are definitely putting your body into a state of autonomic dysregulation, which can be very difficult to recover from.

8). Does the sympathetic nervous system ever adapt to heavy training?

In general – yes! Most athletes have increased resting parasympathetic tone (the low resting heart rates we associate with elite athletes), and as such are well adapted to heavy training. The sympathetic system activates when needed for exercise, and the parasympathetic system comes in very rapidly between intervals, and between workouts, to keep the body from being “activated” all the time. This is why elite athletes’ heart rates can recover so fast even between maximal efforts. However, in order to adapt, we require recovery. Training through fatigue for a long time does not give your body the time it needs to adapt to the increased loads, and will lead you down the overtraining spectrum.

9).  What are the take away messages for coaches and swimmers on your study?

While this study was pretty mechanistic, I have some other studies coming out soon that are a bit more applied. There was a really great study by Aubry et al. in 2014, and they demonstrated that athletes who were functionally overreached (saw a decrease in performance) did not super-compensate as much as athletes who were only acutely fatigued (tired but no decrease in performance), after a training block and a taper period. People seem to have trouble wrapping their heads around the idea that “functional overreaching” may not really be that functional – and that maybe if you train to fatigue, but not to underperformance, you will have the better performance outcomes following recovery. I believe that with my study I corroborated these findings, and demonstrated that you can improve your performance without pushing to a point of autonomic disturbance. To me, as an athlete and a coach, it is all about finding that line where you are certainly giving your body some overload, but then you are giving your body the required rest to respond to the overload, and improve performance! I don’t believe that underperformance is required prior to super-compensation.

10). What else needs to be researched on the sympathetic nervous system and training?

There is a lot of potential for future research in this area for sure. For starters, my study was the first to assess direct sympathetic nerve activity following overload training in triathletes and cyclists, however the overload was performed by adding additional intense cycling sessions to the athletes’ training week. Swimming has a much different load on the body, and has a lesser inflammatory response compared to running and likely biking, which could reduce the increase in sympathetic nerve activity that we saw in this investigation. However, we all know that swimming is exhausting, and definitely has its own challenges (thermoregulation, body position, breathing etc.), so more work directly with swimmers is required to understand their profile of fatigue. Further, as I already spoke about, daily monitoring tools are mostly centered on monitoring parasympathetic activity, and not sympathetic activity. The possibility of sympathetic-driven monitoring technologies may provide us with better assessments of recovery status in athletes.