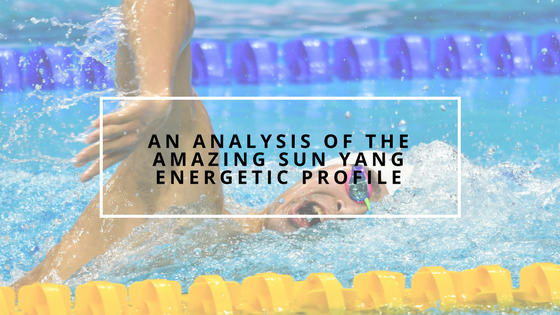 The 12th National Games of the People’s Republic of China were held in the province of Liaoning (Shenyang) from 31 August to 12 September 2013. The Chinese National Games are the ultimate event for swimmers in China. There are some claims that the event eclipses the Olympic Games when it comes to the level of prestige for a Chinese athlete, his team and province.Sun Yang (representing the Zhejiang province) was as expected the main star. He raced the 100, 200, 400, 800 and 1500 freestyle and won five gold medals. It´s impressive how competitive (or dominant) in races energetically as different as the 100m or the 1500m. As a rule of thumb, the aerobic:anaerobic (lactic + alactic) contributions (in %) are 15/85(60+25), 40/60(40+20), 60/40(25+15), 80/20 for the 50, 100, 200, 400 and 800m freestyle races (e.g., Capelli et al., 1988).So, what is Sun Yang´s energetic profile and how did it change along his career? There are more or less direct measurements that can be carry out to have a deeper insight. But based on field testing, assumptions and estimations we might have some clues. I´d like to highlight beforehand that estimations always have some sort of bias. So caution should be taken analyzing the data. I.e., one estimation it is not the same as a measure and this is the main limitation of the analysis that I am about to report to you.Aerobic capacity can be estimated with the aerobic critical velocity (approximately 90% of the onset blood lactate is explained by the aerobic critical velocity; Wakayoshi et al., 1992). The 400 free race is strongly related with the aerobic power (VO2max explain around 70 to 80% of the 400 free performance; Costill et al., 1985; Ribeiro et al., 1990). The y-intercept of the critical velocity equation can be used as the anaerobic distance capacity (actually this is one of the trickiest estimations since such relationship is not consensual among researchers. In the best scenario, because most academics are quite skeptical about this, up to 25% of the peak blood lactate is explained by the y-intercept; Shimoyama et al., 2010). Anaerobic alactic power (here reported only for the 200 free race) can be estimated with the procedure described by Cappelli et al. (1988). I will skip the math of all these as it goes beyond the aim of this post.The 200, 400 and 1500 freestyle races times for the 2009 Chinese Championships (Shaoxing), 2011 World Championships (Shangai), 2012 Olympic Games (London), 2013 World Championships (Barcelona), and 2013 Chinese National Games (Shenyang) were retrieved from a database (www.swimrankings.net). At the 2011 and 2013 WC, Sun Yang swam the 800 relay (not being the first swimmer in any of them). His reaction time (i.e. visual stimulus) was 0.33s and 0.26s in 2011 and 2013, respectively. On average reaction time to sound stimulus takes about 0.6-0.65s, so a correction was done to minimize the bias. Anthropometrics (e.g., body weight) and age were retrieved from the official websites of each competition whenever available. It was calculated the decimal age, aerobic critical velocity, 400 free average speed, anaerobic distance capacity and anaerobic alactic power at in each competition.First idea is that, as reported in the literature, there is a linear relationship between race distance and performance (Figure 1). Meaning that there are very good chances to predict with a fair accuracy the final time of any race within the 200-1500m band by interpolation (e.g. the 800 free). In both World championships he also raced the 800 free and as we can see, that performances are quite predictable (Figure 2). An interesting question is if we get accurate predictions extrapolating data beyond this 200-1500m band (i.e. for races bellow the 200m or above the 1500m). Visual inspection of the graphs gives another idea. Over time, the trend line is shifting slightly to the left side (i.e., performances are improving) and the straight-line slope is increasing until the 2012 OG (figure 1). Figure 2. Sun Yang´s critical velocity in 2011 and 2013 at the World Championships, including the 800 free race.Based on this figures it seems that he built-up both his aerobic and anaerobic capacity and power on the road to the major competition of the Olympic cycle (i.e. 2012 OG). At the 2013 major competitions there is a slight decrease for the aerobic component. It is impressive how the aerobic critical velocity impaired in less than one month. From the 2013 WC to the 2013 CNG it decreased almost one second for each 100m split. Could it be due to a short break between competitions? Motivational issues? Illness? His mother was quoted in specialized press, saying that he had a cold in between competitions and was enduring because of that during the 2013 CNG. Interestingly, anaerobic distance capacity and anaerobic alactic power estimations suggest that he improved the anaerobic contribution to total energy expenditure this year (table 1). For one side this is kind of obvious since the critical velocity decreased, and hence the trend line slope flatted down. On the flip side, both anaerobic estimations suggest an improvement of that component. The improvement in the 200 free race is consistent with this trend.One of the most interesting things is that Sun swam the 200 free almost as fast as the elite college swimmers assessed 25 years ago by Capelli et al (1988) did in 45.7m (50 yards) race. Capelli´s swimmers had an average speed at the 45.7m of 1.97 m/s, while Sun swam the 200m at 1.90 m/s (2012 OG) and 1.93 m/s (2013 WC). Cappelli´s swimmers had an anaerobic alactic power of 0.83 kW at the 45.7m, Sun 0.69 kW (2012 OG) and 0.77 kW (2013 WC and CNG) at the 200m.Table 1. Energetic estimators selected.

No matter what, Sun Yang´s range is outstanding. I guess he is one of the fewest men on Earth having less than 15-min at the 1500 and 48-sec at the 100 free (48.94 at the 2013 CNG). That is something that makes him so special and the main swimming star for a lot of people, at least on this side of the world.

Tiago M. Barbosa earned a PhD degree in Sport Sciences and holds a position at the Nanyang Technological University, Singapore.