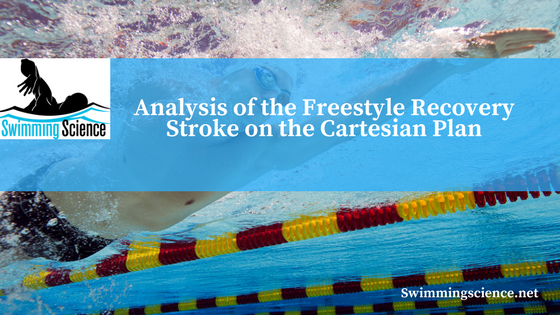 Background on the Freestyle Recovery Stroke

Did you know it’s possible to adjust the distance between the elbow and the central point of the head? Simply take the elbow’s height into consideration (pic. 1 to 4).

Let’s use the Cartesian plane to better visualize the distance between x and y from the central point (0).

Now that we are aware of this process, how can we improve the movement?

Although it seems positive, it results in a worse leg movement, leading them to move on the side and follow the movement of the shoulders. With this said, it’s necessary to take into consideration your leg movements as it would depend on the inclination of the shoulders.

Another peculiarity of the high shoulder involves the other shoulder, which is in frontal stretching. It could go too deep and take the rest of the body under water. This will compromise the principle of floating, as known from the Archimedes’ fluid mechanics principle.

Lateral respiration changes too: high elbow means high shoulder. This helps head lateral rotation to breathe but could also mean having an over lateral rotation, taking down both body and arm in the water during the pushing. This will have an impact on the body ax and on the stroke, itself.

When the arm is over water, there is a recovery phase where strengths are back and the muscle utilized in the peak of the push is now relaxed. The straight arm overwater has an optimal rotation at shoulder griddle level but it might overstress the deltoid and the tendons of the triceps.

An over bent arm tends to overstress the deltoids and trapezius, especially in cases when it tries to get close to the head. The elbow goes up and that involves hard work for the rotator cuff and bicep. The bicep will tend to shorten as the forearm gets closer to the arm.

Agonist and antagonist muscles need to be properly trained in a balanced way. Each swimmer requires tailored swimming training to help the arms get back the strength it needs.

My suggestion as an international coach is to start training the straight arm in both situations: over water and underwater. This will help the rotation of the shoulders and give stability to the swimming style.

Finally, training a young swimmer to push water until the end of the underwater stroke is also a great idea. Pushing the water with the hand near the knee is the best way. You also need to work on the recovery over water with the half bend arm.

Written by Livio Cocozza: I have a degree in Sports Science at University of Perugia, Italy. Over the years, I have gained vast experiences in training and coaching swimming