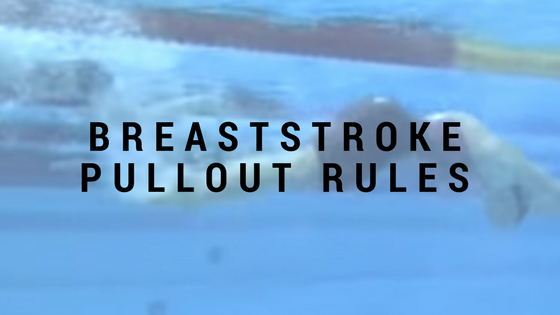 “101.2.3 Kick – After the start and each turn, at any time prior to the first breaststroke kick a single butterfly kick is permitted. Following which, all movements of the legs shall be simultaneous and in the same horizontal plane without alternating movement. The feet must be turned outwards during the propulsive part of the kick. Scissors, alternating movements or downward butterfly kicks are not permitted except as provided herein. Breaking the surface of the water with the feet is allowed unless followed by a downward butterfly kick.”

Now, this article may be sounding like a springboard to bash the officials or even the athletes, bu it is not. As an official, it is certainly difficult to monitor a double dolphin kick from the pool surface. Imagine trying to catch a slight knee bend when the swimmer is near the middle of the pool.As a swimmer, you’re going to do whatever it takes to go faster, especially if you’re not going to get caught. This may sound a bit much, but it is certainly true for the majority of elite athletes (not just swimmers).

The above video is an underwater shot during the race clearly shows a double dolphin kick. Why is this race video not being utilized by the officials for implementing the rules they created? Nearly every sport uses video review for improving the sport, most notably implemented by baseball in 2013 after much resistance. However, video review is used in many other sports for rule review. Tennis uses hawkeye for monitoring shots which are too close to see if they are in or out. Judo does on their main events: camera’s provide two judges sitting on the side of the tatami with a delayed view on the fight to assist the judge leading the fight, and the system also offers replay-functionality.

While video review is a great idea, there some issues. For one, at what competitions do you utilize the review? Are National meets and International meet enough? How many pools have the equipment for this? If someone breaks a record at a meet without video review, does it count? What other rules can be monitored? Who decides on the review?

Now, these are only a few of the many questions, but I feel these can be answered with a experienced group than me.

Personally, I’d prefer the dolphin kick during the pullout to be banned and have underwater video review implemented, but I don’t see this happening, as banning the dolphin kick will slow down the sport, something FINA wants to do. If dolphin kicks are allowed to the 15-m mark in breaststroke, the most unique stroke turns into another branch from butterfly.