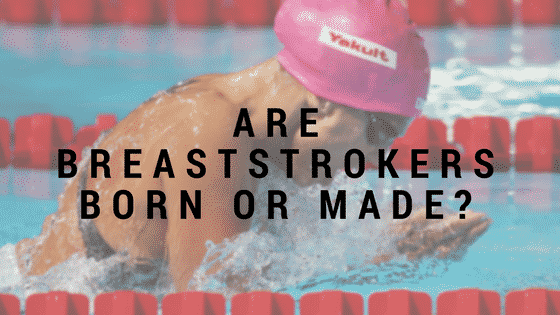 “It’s one of those things where you don’t pick the stroke, the stroke kind of
picks you,”

It’s an age old question for which there is no perfect answer.  Many would say they are born, but coaches have turned many”3/4’s” IM-ers into well rounded individual medley competitors.  Despite variation in individual experience, research may guide us toward what qualities matter when selecting young breaststroke talent. 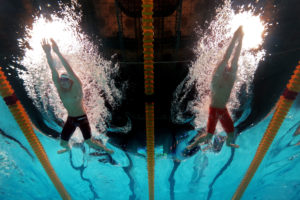 In previous reviews, we have analyzed anthropometric and flexibility research, noting that “Jagomagi and Jurimae (2005) found that hip external rotation was predictive of breaststroke kick speed along with knee external rotation and ankle supination. Interestingly, hip internal rotation in static posture was not correlated with kick speed, which suggests that kick improvements are more trainable than many suspect.”

However, like many breaststroke studies, the conclusions are imperfect, as the study focused on breaststroke kicking and not the full stroke. Another unique tidbit to emerge from this study is that ankle SUPINATION, not pronation, was indicative of breaststroke speed.  So a key point is not only seeking kids who can evert their ankles, but finding those who can take their ankles through the full range in multiple planes (dorsiflexion, plantar flexion, inversion, eversion).

Fortunately, we need not rely strictly on kicking studies, as others have studied full stroke timing parameters.  Natural breaststrokers seem to have a natural affinity for timing their pull and kick optimally.  In a very recent study on skilled age group swimmers, Strzala (2013) reported, “Significant relationship was noted between minimizing the first non-propulsive phase of arm recovery with higher contribution of the next, partially immersed sliding phase of arm recovery.”  Armed with knowledge of objective timing parameters, might it become more possible to ingrain effective timing at young ages?

Finally, also consider the role of energy system.  Anyone swimming breaststroke correctly will attest it is a very demanding stroke energetically.  This is confirmed via research showing that “swimming speed using breaststroke kick depended to the largest extent on anaerobic endurance.”  (Strzala 2012) Though efficiency is often the goal in building a stroke, strength cannot be discounted, especially in breaststroke, with Seifert (2005) finding that male breaststrokers demonstrated an “ability to overcome very great active drag.”  This finding may suggest a more anaerobic tendency when identifying young talent.

Is it Risky to Be a Breaststroke Swimmer!

It’s risky to force kids into a specialty too early, especially a unique stroke such as breaststroke.  Just as most would not recommend early specialization in a sport, you can almost view breaststroke as its own sport in this context.  This is especially true given the risk of repetitive use knee injuries in kids, and more critical with the changes to bone that occur in the hips and knees even through the late teenage years.

We’ve discussed the concept that changes to bone in the hip and knee adds to the uncertainty in predicting which athletes will thrive as breaststrokers.  Osseous changes may also affect injury risk in both breaststroke specialists and non-specialists, as the knee is one of the most frequently injured body regions in swimming (Johnson 1987, Soder 2012, Vizsolyi 1987, Rovere 1985, Knobloch 2008).

Now we will explore those anatomical characteristics in greater depth. Common thinking for identifying breaststroke talent is to see how kids walk on deck, as those with toes pointed out are thought to be the future breaststrokers. Obviously performance must also play a factor, as swimming speed is the most important measure of all. While general guidelines such as “toeing out” are sometimes correct, it is an inexact measure and fails to acknowledge the fluidity of changes to bone in key areas.
First, be aware that certain concepts in this post are theoretical, having not been tested in the context of swimming. In fact, most of what we know about the hips in this context comes from radiographs (Xrays, MRIs, etc) in pathological populations. But we do know that certain implications arise from certain biomechanical qualities. The acetabula are “dishes” in the pelvis within which the head of the femur sits. They behave very much like the shoulder joint, but with even more stability. Key point here is that a DEEP ACETABULUM may limit transverse plane motion (internal and external rotation) and possibly frontal plane motion (adduction/abduction). This is not fatal to anyone’s breaststroke aspirations, nor is a shallow acetabulum a guarantee of success, as too shallow may lead to joint instability. Yet even with “normal” acetabulum depth, the hip joint may suffer from other deviations, particularly in growing young kids. Discussion about femoral anteversion and retroversion has been popular in sports medicine recently with the growth of the femoral acetabular impingement (FAI) diagnosis. Most FAI occurs in multidirectional land athletes (hockey, soccer, lacrosse, basketball), but hip anatomy concepts also apply to breaststroke. Unlike acetabular depth, RETROVERSION AND ANTEVERSION can both be easily estimated without radiographs or surgery. Key point: an anteverted pelvis may bias the hip toward internal rotation while a retroverted pelvis may bias the hip toward external rotation (toeing out). Now, if you read carefully, you’ll note that anteversion may create conflicting biases for breaststroke….We often associate the classic breaststroke posture as internally rotated hips with “duck feet” (toed out) posture. This dichotomy means an “ideal” breaststroker may own the combination of mild hip anteversion with the ability to externally rotate the knee (at the tibiofemoral joint) with the concomitant ability for ankle movement in all planes. However, though potentially beneficial, excess anteversion must not limit hip external rotation, as both internal and external are crucial for optimal kick mechanics. Finally, also consider hip joint angle in frontal plane, pathologically referred to as COXA VALGA and COXA VARA. Like acetabular depth, this can be hard to measure on deck, but remember the key point about individual differences. In general, know that a more vertical angle at the femoral neck (coxa valga) may bias toward external rotation, while the opposite (coxa vara) may bias toward internal rotation. Though much of our discussion here focuses on structure, don’t forget the brain. Changes to bone require new learning to occur, as the swimmer must evolve his/her kinesthetic awareness. Though changes are subtle, they do require adjustment for optimal motor learning. Ideally, function may keep pace with changes to structure, but that is not always the case, and one theoretical cause for injury. This reality is yet another justification for why multiplanar “play like” dryland activities can be valuable for the young, developing swimmer, as varied movements provide a proprioceptively rich environment for body awareness.

For training, our goal is to give the athlete the best training possible given their individual qualities. Kids with unique joint angles may require stroke modifications. The same general rules about training hips in breaststroke apply, but it’s important to appreciate why some kids respond well to breaststroke training and why others have less aptitude. Hopefully this may also help refine our talent pipelines so the right kids can focus on the right strokes at the right times.
Schedule a Free Call, Click Here!