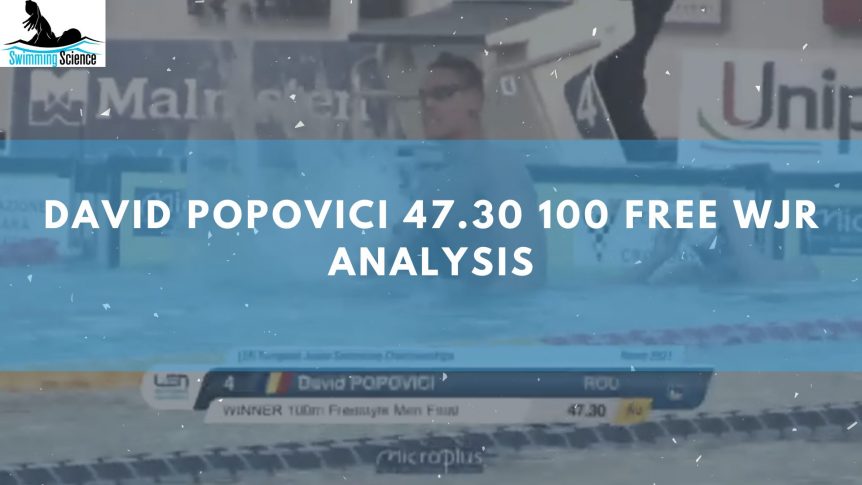 The 2021 [2020] Tokyo Olympics are fast approaching and no one is approaching them as fast as 16-year-old David Popovici. He went from a deep swim nerd name to a gold medal contender to expectations of breaking 46 seconds (from some, not this author) in less than 6 months. However, will we see Popovici break a 100 free WR in the future? Only time will tell, but is certainly turning heads, even from the heavy favorites Caeleb Dressel and Kyle Chalmers.

For those who haven’t followed one of our analyses, these analyses are for fun and to spark debate. There are some inherent flaws in this race analysis:

Popovici took 9 strokes over this distance at a velocity of ~1.97 m/s.

Popovici took 8 strokes over this distance. He maintained around 2.0 m/s.

Taking 11 strokes into the wall, Popovici slowed a little into the turn, with a velocity of 1.85 m/s over the last 15 m.

Clearly, Popovici’s strategy is more like Chalmers, but even more extreme (at least compared to Dressel and Cielo).

Over this distance he takes 9 strokes and maintains his velocity.

Into the wall, he takes 13 strokes. He is able to maintain nearly the same velocity.

Popovici is able to maintain his velocity off the turn, and provide a very similar velocity and stroke count over the second 50-meters. His distance per stroke over the last 15-m is a bit higher, 1.15 meters/stroke, but this is likely from the extra stroke he took into the wall.

It is hard to imagine at 16-year-old is now in discussion for the Tokyo Olympic Gold, nonetheless, Popovici’s swim puts him in the discussion. His impressive back half speed, similar to Chalmers is playing into Popovici’s strengths compared to the other main competitor at the upcoming Olympics Caeleb Dressel.

Theoretical Improvements for David Popovici to Break the 100 Free WJR

There is room to improve for every swimmer. Here are the notable improvements from David Popovici 100 free WJR:

With these improvements, he can improve another ~0.5 seconds, taking him under the current WR.

There are likely more technical improvements with his swimming stroke, but the video from the race is not close enough or provide underwater angles for full assessment.