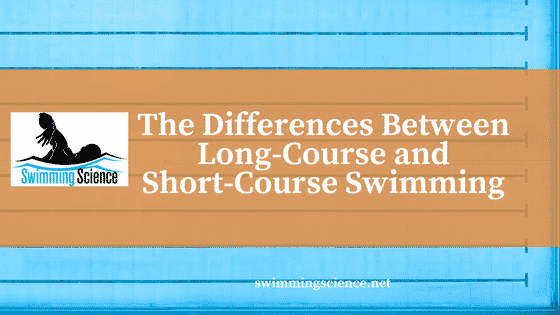 During springtime, many swimmers transition from winter short course training and racing into summer long course season.  Though some teams have the option to alternate long course and short course throughout the year, others swim exclusively in one swimming pool setup regardless of the current competitive season.   We all know that SCY and LCM feel extremely different and have different intervals and race durations.  But what’s exactly underlying these differences and how can we make adjustments, if any?

The most obvious difference between short and long course is the number of turns: “SCY races are a series of events joined together to form a single race.  A swimming phase followed by a turning phase followed by an underwater kicking phase.   Although the same can be said for LCM swimming, the duration of the swimming phases in SCY swimming are very different (Skinner).”   Because swimmers alternate different phases more frequently during short course swimming, the swimming portion can occur at a higher velocity, not only due to “breaks” but also because swimmers achieve the highest velocity off the turns (assuming the turn is not horrible).

Skinner adds, “[a] common denominator in long course race analysis (USA athletes) is the constant stroke rate degradation that occurs on every lap of every race.  It is the extreme exception when I see an athlete maintain their stroke rate across the pool, and in some cases there is a significant drop off in stroke rate during the second half of each lap of the race.  Bottom line here is the fact that the athlete is unable to sustain their neural function all the way across the pool and this leads to significant losses that aren’t that easy to see.”

An earlier Keskinen (1996) study assessed biomechanical changes between the two pools. Dr. Rushall summarized this study with the following points:

Additionally, because turns play a less important role in long course, explosive dryland dedicated for turns should be deemphasized for long course relative to other training objectives.  However, though most long course training takes place during summer months when time restrictions are lessened, the total volume of dryland may actually increase in total but decrease as a percentage.  Whenever total volume increases, the attention to injury prevention efforts must increase correspondingly to ensure the athletes can absorb changes in load, particularly when mixed with changes in pool setup.

Finally, remember that regardless of your swimming pool setup, it is still possible to succeed under any conditions.  Some foreign countries swim almost exclusively long course and succeed at short course meets (whether SCM internationally or SCY in the US college system), while some Americans succeed internationally with limited LCM training compared to their foreign counterparts.

Wolfrum (2013) conducted an expansive study on over 90,000 data points in both national and international level swimmers in Switzerland.  Though some data was germane to national development in Swiss athletes, the research addressed two major questions that could be extrapolated beyond national borders.

1)  Were there any significant differences between courses?

Not surprisingly, swimming performances in short course (meters) were faster than long course, with the actual difference at 2% in the entire data set including both genders.   In both genders, SCM performance was significantly faster in the 50m through the 400m.  Of special note was the convergence in short course and long course times in the 800m and 1500m, with the women actually FASTER in 800m LCM than SCM. Men showed a similar trend, with LCM and SCM times effectively equal in the 1500m.

Though this result may seem counterintuitive, it could also be that swimmers approach long course championships with greater priority, with a stronger taper negating the course setup difference.  However, it could also indicate that swimmers in the sample are not maximizing their underwater performance in distance events.  This type of comparison would be instructive in a US sample, where SCY and LCM are vastly different pool setups.

The second major question addressed for international interest is whether males and females show any significant differences.   Authors summarized, “our results further showed that the sex-related difference in Swiss long-course events increased over time, because the performance of Swiss men improved, while performance of Swiss women did not. The sex-related difference in Swiss short-course events did not change, because neither men nor women showed improvement on short course.”

One caveat to the short course trend is that fewer swimmers competed at meaningful domestic short course meets in Switzerland, possibly skewing this data portion.  Again, the cultural values toward short course swimming may necessitate specific inquiry into United States trends given our heavy emphasis on SCY at many levels.

Though this data largely validates what we already know about long course and short course differences, the time convergences between SCM and LCM in distance events may suggest more room for improvement in underwater performances in mid distance and distance races.   In shorter events, the difference between SCM and LCM may reflect the modern focus on underwater training, as many coaches and swimmers have rightly regarded turns and underwaters as separate events unto themselves.  The data can also be used to motivate swimmers who are slower than 2% slower long course.

Written by Allan Phillips is a certified strength and conditioning specialist (CSCS) and owner of Pike Athletics.