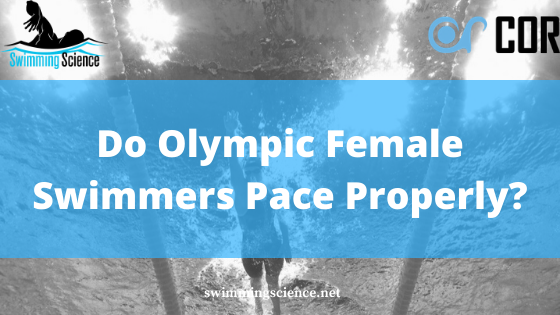 This sounds absurd at the surface, but pacing is more complicated than many of as assume. Pacing requires a perfect balance of physiology and psychology which is dynamic, changing throughout the race. This is why various sports have researched ideal racing profiles for their events.

Past research by Demasceno (2013) have already reported that the speed profile of 800- and 1,500-m freestyle swimmers is generally parabolic, with U-shaped or reverse-J variants (Abbiss 2008).

How They Determined if Olympic Female Swimmers Pace Properly?

The study states: "Official 50-m lap and race times for 400-m female freestyle swimmers in international and national competitions were downloaded in September 2016 from the swimrankings.net site...... The final data set consisted of final and lap times for 381 swims of 20 elite female swimmers in 216 competitions between January 1, 2004, and August 31, 2016. Each swimmer provided between 13 and 28 swims (21.4 ± 4.9, mean ± SD). The swimmers' minimum age ranged from 15.0 to 23.1 years, whereas their maximum age ranged from 19.1 to 29.1 (18.3 ± 2.2 and 24.5 ± 2.6; mean ± SD, respectively), and they were in the top 24 of the best female 400-m freestylers based on FINA world ranking between 2004 and the Rio Olympics in 2016. We decided to include swimmers whose personal best time was shorter than 4:03.85 because it was the current world record in 2004. Four swimmers from 11th, 15th, 19th, and 23rd place in FINA (International Swimming Federation) world ranking were excluded from the final data set, owing to a small number of swims (<8 races) with lap times for every 50 m. The remaining swimmers had at least 13 swims with 50-m lap times for all swims. Of the 381 analyzed swims, 84 were from Olympic Games and World Championships, 41 were from European Championships, Pan-Pacific Championships, or Commonwealth Games, 7 were from Universiades, 189 were from international meetings including Olympic Trials, and 61 were from national championships."

From this data the research team broke down each swim with 5 parameters derived by multiple linear regression:

In the analysis of the best swims of each swimmer, the profiles of the second through seventh laps all represented a linear small reduction in pace with negative quadratic curvature and with the fifth lap being the median slowest.

In her best swim, the best swimmer (Kathleen Ledecky, who broke three 400-m world records in last 3 years) had the most curvature (16%, expressed as the “depth” of the quadratic parameter: the contribution to the predicted middle minus the predicted first or last lap), the slowest first lap parameter (−3.3%) and the lowest lap-to-lap variability (0.20%) of all her swims.

Her pacing parameters were similar to those of previous world record holders (Pellegrini and Manadou) on average and in their best swims: slower first lap, more curvature, and less lap-to-lap variability in comparison with less successful swimmers.

In short, yes, Olympic female swimmers can pace better. However, this is a much harder feat than many believe.

The results of this study suggest an ideal pacing includes:

During Katie Ledecky's World Record swim, she was able to follow these three parameters. However, she has been going out faster and faster, causing her to decrease velocity at the end of her race. We can see the comparison of splits between her and Titmus at the 2019 World Championships:

Hope you find this helpful! A few questions for you to ponder:

Good luck to all swimmers mastering this juggling act and hopefully these results can help you perform!