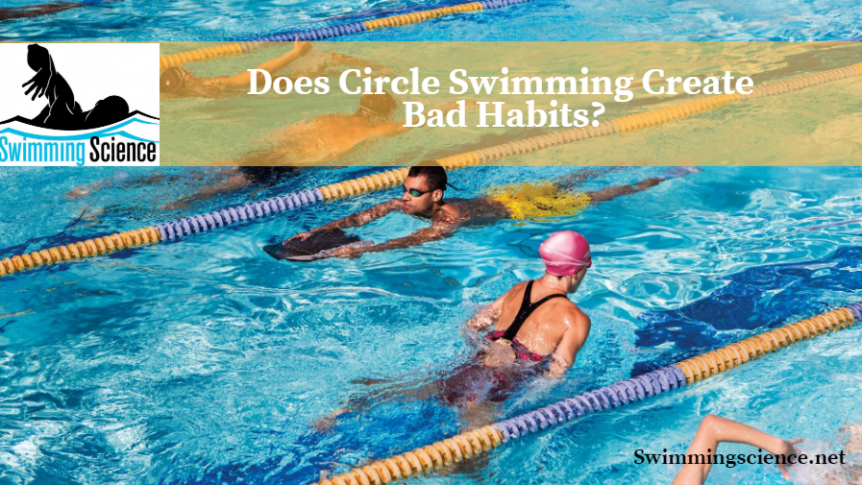 Circle swimming is a fact of life for nearly every team.  Even if your current situation does not require circle swimming, it’s likely at some point in your career you have done it.  To be clear, many good things that come from circle swimming: the ability to accommodate more swimmers and the ability to group swimmers by speed are two significant benefits. Despite the popularity (and necessity) of circle swimming, it is not without potential drawbacks.   Most teams don’t have the luxury to give everyone their own cloistered lane, but at the least, we can identify habits that may relate to circle swimming.  Think of this not as scientific gospel, but instead as a cheat sheet based on critical thinking and observation. Some things to watch out for…Habitually rounding turns or sloppy turns in general:
Sloppy practice turns frustrate many coaches and often lead to wasting time with special turns practices to undo bad habits (doing extra work just to return to where you started!). More specifically, it’s painfully clear from deck that some swimmers round their turns in races….with no one in the lane!  The priority in a circle swim at the wall often becomes avoiding a traffic jam rather than executing the best possible turn. Knee troubles…
Circle swimming turns (particularly if swimmers are bunched together) encourages early rotation on the wall, rather than pushing off straight and then rotating while streamlined.  As Dr. John has written previously, “During a poorly done flip turn, a swimmer commonly attempts to push-off the wall and rotate simultaneously. This combined motion opposes Newton’s law of motion, impairing force production. Moreover, this can increase the shear stress at the knee, specifically the meniscus.”

Drafting and sense of pace:
Though swimming side-by-side can also distort pacing, circle swimming offers additional opportunities for drafting directly behind the swimmer ahead.  Certainly, coaches can police swimmers who alter their pace to grab the wake of the swimmer ahead.  But when drafting does occur, it can significantly improve swimmers’ ability to sustain keystroke parameters of swim velocity, stroke length, and stroke frequency (Chollet 2000). Janssen (2009) found that 0.50-m from the toes of the lead swimmer to the fingers of the trail swimmer was the ideal draft distance, yet performance benefits do exist within a range. Head up swimming:
Though largely anecdotal, many swimmers live with a constant concern of avoiding collisions both at the wall and mid pool.  As a result, many tilt their heads slightly upward to observe potential oncoming swimmers or an errant left arm from a butterflyer.  Such positioning can add excess frontal drag via the head and also via dropped hips.  Experience often weans swimmers out of this fear, but because “practice makes permanent,” swimmers often accumulate many repetitions with sub optimal body position.  In addition to the performance implications, such a head position may also relate to common neck problems in swimmers (Troubleshooting Series: Cervical Spine). Practical implication/ConclusionCircle swimming is an inherent part of swimming culture.   Yet despite its permanence, it may have unintended and often overlooked side effects.  As a whole, the benefits of circle swimming outweigh the drawbacks, as eliminating circle swimming would require a major downsizing of the entire sport!  Coaches and athletes should remain attuned to the common habits that may arise within this environment to either take preventive or remedial action.