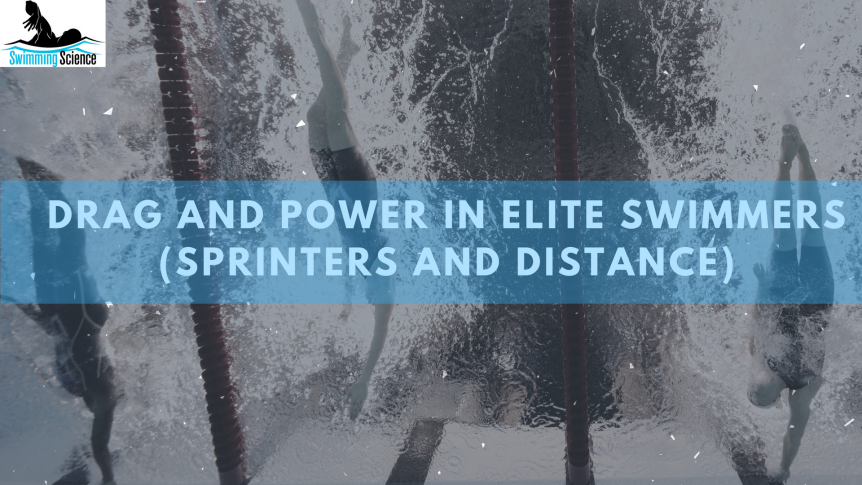 The drag is the resistance force to the displacement that acts upon the swimmer. Drag force depends on anthropometrics, speed, water density and drag coefficient (Marinho et al., 2009). Total power output (Po) is the sum of the power to overcome the drag (Pd) and the power to transfer kinetic energy to water (Pk) (Toussaint, 1990). The Pd is the power that actually displaces the swimmer. The Pk is the power that is wasted moving the water.

Do you remember to see in the swimming pool one of those guys that rotate their arms so much, at a huge cadence and simply does not move one meter?

This swimmer has a very high Pk. All his power is transferred to water, so there is no Pd. He moves the water, he does not displace in the water. For those of you with some background on this topic, FYI: I am going to neglect the internal mechanical power.

Probably it is easier to have a deeper insight into these concepts and how useful such details are for swimmers if I showcase to you with a couple of examples. How about the analysis of the best sprinters and open water swimmer in the world? A sprint and a long-distance event.

So let’s carry out a two-fold analysis:

In other sports (e.g., cycling or ice skating) it is a common practice to estimate drag and power output after developing mathematical models. In swimming, it is more challenging but feasible. We needed to input a few direct measurements and have a couple of assumptions. This time around, my model includes data reported by:

Pd, Pk and therefore Po were also higher for Cielo Filho. Men tend to have a higher explosive strength (i.e. power strength) than women and therefore, a higher power output. As happens in motorcycle racing, car racing and cycling these details can be used to:

In those sports, pilots, and engineers monitor the RPM (in swimming we assess the stroke rate) and fuel consumption (in swimming the energy expenditure) because both are related to power and speed. I.e., RPM/SR and fuel/energy expenditure are an indirect rather than a direct way to monitor the power output. In other words, both are used to have a clue about what will be the power output. Hence, I am wondering that probably drag and power outputs are more informative of the swimmer performance and provide a deeper insight than other parameters. 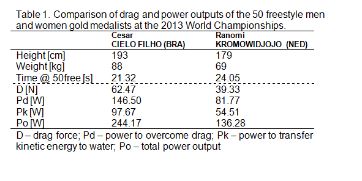 According to Oussama Mellouli final race time at the 5km, his average swim pace was 1.56 m/s. With the same mathematical model, I estimated his drag and power output while leading the race and if he would be drafting behind another contender (between less than one meter and more than 7 meters). If Melloulli is able to stay roughly 1 to 2 meters behind another swimmer, he will be decreasing the drag force acting upon him in about 40 to 45% (Figure 1). So, his power output to keep swimming at 1.56m/s decreases as well. I.e., he will be saving energy that can be elicited later on, according to his racing strategy. If he is too far away from the leading swimmer, let’s say, at 6-7m his drag force is diminished in 10%. 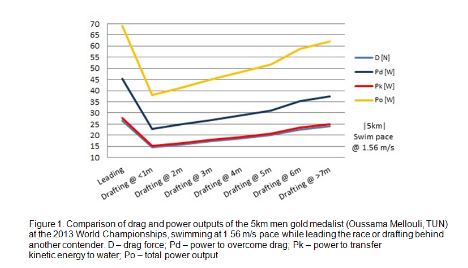 References for Drag and Power in Elite Swimmers

By Tiago M. Barbosa that earned a PhD degree in Sport Sciences and holds a faculty position at the Nanyang Technological University, Singapore

Originally posted in May 2014.