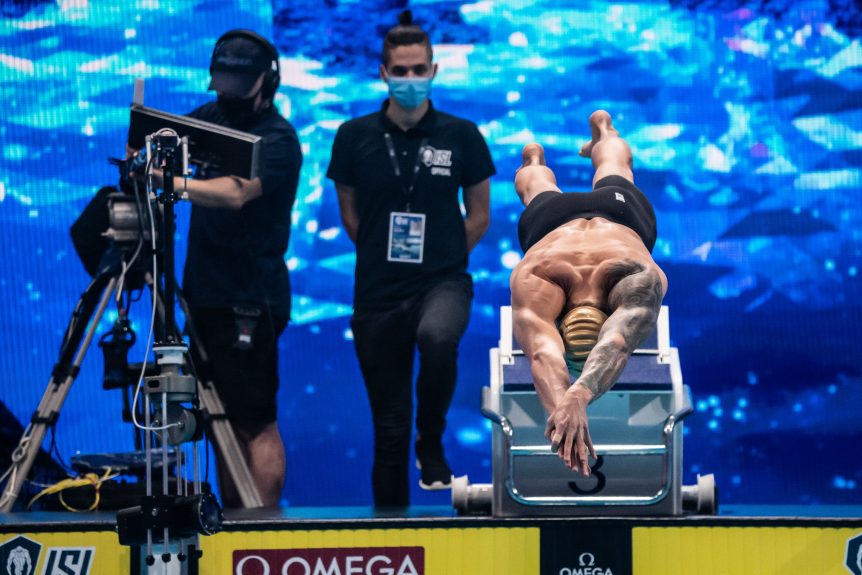 Caeleb Dressel’s 20.16 scm 50 free WR gave him now both short course records in the events (SCY and SCM). Mr. Dressel broke Manaudou’s WR last year and he was able to re-break the record on November 21st 2020 in the ISL bubble.

For those who haven’t followed one of our analyses, these analyses are for fun and to spark debate. There are some inherent flaws in this race analysis:

Visually, it appears his feet were not together upon his entry, likely creating more drag upon entry.

A first 25 time of 9.62 seconds put him in first. However, his subpar start (for him). He had a velocity of 2.38 m/s, which is 0.32 m/s slower than his 50 yards time. Obviously, we know this to be slower, as meters is longer and his velocity decreases over distance.

Dressel had an excellent turn, using 6 dolphin kicks off the wall to breakout at 3.78 seconds. His time to 15-m was 5.64 seconds, which was 0.06 seconds faster than his SCY record. He took 4 strokes to 15-m, which equals his stroke count in the SCY race.

His second 25 time, 10.54 seconds. He covered the length in 14 total strokes, with a distance per stroke into the wall of 1.0 meters/stroke.

Every WR is exceptional. However, many swim fans (I also believe Caeleb) were let down with this race. Theoretically, he can break 20 seconds in the 50 SCM free, by simply having a better start (that he has done before). Clearly, Dressel has the best start in the World, but this was not his best start, it did suck for him.

Replicating his SCY NCAA record start would drop his time by 0.23 and put him at a blistering 19.93!

Time for some fun, how can Caeleb improve his 50 free World Record Record other than just swimming his best race (ie nailing his start).

Well, there isn’t as much to analyze in the 50 free, but there are a few aspects for Caeleb to improve.

With these slight improvements, I could see Caeleb going 19.75 in a new 50 free WR next year of the ISL.