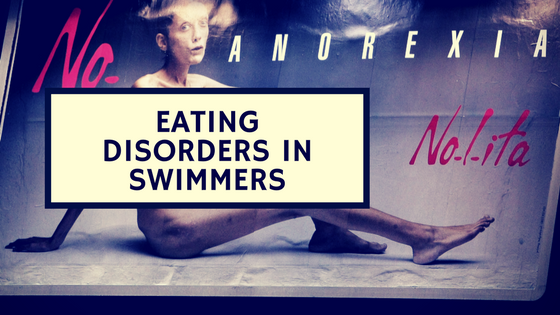 It’s no secret that food is tightly woven into the swimming culture. From pre-meet carbo load sessions to post-practice gorges to some swimmers wanting to cut weight, it’s almost impossible to avoid the presence of food in swimming rituals. But a less talked about, and often taboo subject in the swim community, is the presence of eating disorders in swimmers. This is hardly a new topic, but recent research deserves review in this context. Further, many coaches, athletes, and parents are simply unaware of the problem while others retain a balance of ignorance and denial.

Swimming, by its nature, carries a higher risk of athletes developing eating disorders. “Athletes in leanness-demanding sports have an increased risk for RED-S and for developing EDs/DE. Special risk factors in aquatic sports related to weight and body composition management include the wearing of skimpy and tight-fitting bathing suits.” (Melin 2014) Though many swimmers are proud to showcase their sculpted bodies with minimal clothing, the constant display has a psychological cost for many, particularly females.

This psychological cost often drives eating disorders, often considered a taboo subject. Because eating disorders are more than a food issue, coach and athlete communication are key. Yet this is often an issue with gender overtones, and many male coaches are unable to communicate effectively with young female athletes, no matter their best intentions. In one recent study in high school sports (not only swimming), “Significant differences were found between male and female coaches in certain attitudes and communication behaviors related to eating and menstrual irregularity. (Kroshus 2014)

However, misunderstanding is not restricted to gender, as “Coaches knowledge [of the Female Athlete Triad] was limited; however, most (9/10) were comfortable discussing menstruation with their athletes. Barriers to Triad screening/education were coaches' insufficient time, knowledge, and educational resources.” (Brown 2014) Though eating disorders can spiral into physical and psychological depths, physical performance can be negatively impacted at the early stages. “[Disordered eating]-positive compared with DE-negative athletes presented a higher percentage of body fat and fat mass, lower protein consumption in the 11- to 14-y-old group, and lower calcium intake adequacy in the 15- to 19-y-old group. Greater attention should be given to the nutritional state of these athletes, considering the number of adolescents with anemia and an inadequate dietary intake.” (Da Costa 2013)

Conclusion on Eating Disorders in Swimmers

Like many issues outside the pool, awareness is most important. While coaches and parents may lack certain expertise to intervene if problems reach clinical levels, everyone has the expertise to create the right environment to prevent problems. Though swimmers are often known to eat with impunity to refuel from 4+ hours of practice a day, a dark underside of eating disorders exists among a subset of athletes, particularly females. Awareness is the first key step to ensuring swimmers are healthy both mentally and physically to thrive in the pool.