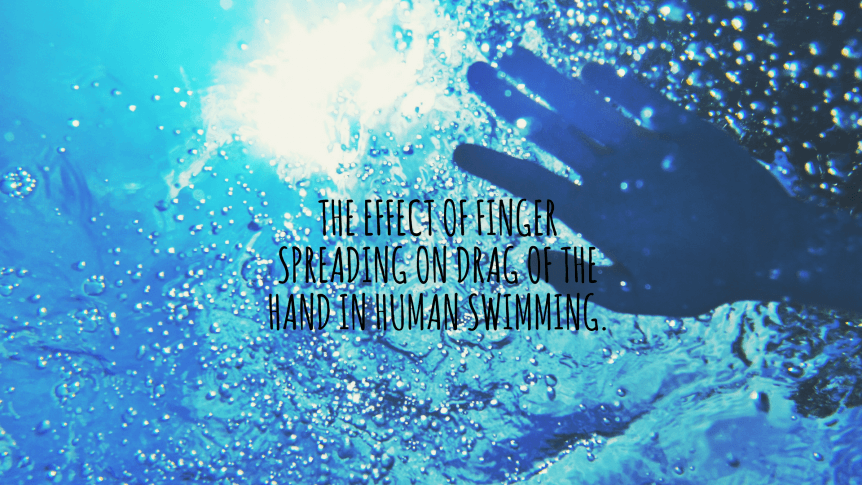 The effect of finger spread on overall drag on a swimmer’s hand is relatively small, but could be relevant for elite swimmers. There are many sensitivities in measuring this effect. A comparison between numerical simulations, experiments and theory is urgently required to observe whether the effect is significant. In this study, the beneficial effect of a small finger spread in swimming is confirmed using three different but complementary methods. For the first time numerical simulations and laboratory experiments are conducted on the exact same 3D model of the hand with attached forearm. The virtual version of the hand with forearm was implemented in a numerical code by means of an immersed boundary method and the 3D printed physical version was studied in a wind tunnel experiment. An enhancement of the drag coefficient of 2% and 5% compared to the case with closed fingers was found for the numerical simulation and experiment, respectively. A 5% and 8% favorable effect on the (dimensionless) force moment at an optimal finger spreading of 10° was found, which indicates that the difference is more outspoken in the force moment. Moreover, an analytical model is proposed, using scaling arguments similar to the Betz actuator disk model, to explain the drag coefficient as a function of finger spacing.

Practical Implication: Swimmers should use slight finger spread while swimming for a theoretical propulsion improvement. More research on actual, non-3D models would confirm findings. Also, research on the finger spread in various strokes would be beneficial.