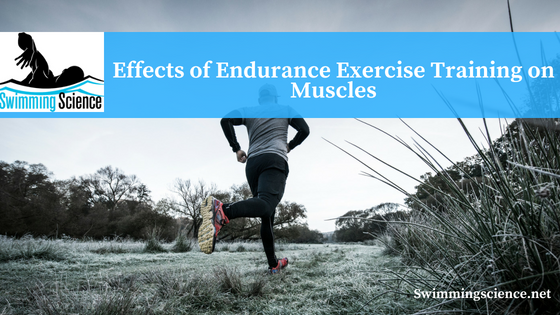 Endurance exercise training is a common mode of training for swimmers. This form of training causes many structural and functional adaptations that enhance capacities for skeletal muscle.

It is believed, submaximal exercise (endurance exercise training), drives up VO2 and improves coupling between energy, but these properties reduce the rate of glycolysis and reliance of finite energy sources and increases exercise tolerance.

The purpose of this study was to determine the effects of endurance exercise training on muscle PO2mv and whether augmented NO-mediated function contributes to increasing PO2mv from rest to contractions in rat skeletal muscle after training.

A total of 28 male Sprague-Dawley rats were used for the study. These rats were familiarized with downhill running for a 1 week period. Then, they were randomly assigned to either a sedentary or endurance exercise group. The sedentary rats were confined to cage activities whereas the trained rats ran 5 days/week for 6 – 8 weeks on the declined treadmill (-14% grade).

VO2peak, muscle mass, muscle P02mv, and citrate synthase activity were tested in both groups before and after training.

This study found endurance exercise stimulated improvement in microvascular oxygenation profile across the metabolic transient. These results suggest that the enhanced driving force for blood-myocyte O2 flux during contractions with exercise training is mediated, at least in part, via the increased NO-mediated function.

This suggests endurance exercise training enhances microvascular oxygenation during contractions partly via the increased NO-mediated function. Unfortunately, the correlation between rats on a treadmill and rats is minimal, but it is useful in learning the role of NO functionality.