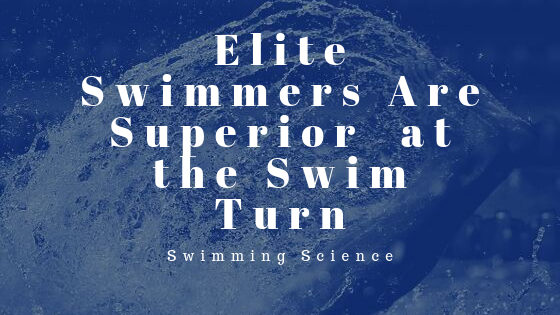 The swim turn is usually divided into 5 distinct stages that include (a) inward-turn, (b) rotation, (c) push-off, (d) underwater, and (d) outward-turn.

Jones (2019) analyzed a total of 43 swimmers (ranging from age 16 to 29 years and consisting of 19 females and 24 males). All swimmers were part of a national squad of swimmers selected by Swimming Australia and were tested in the early phase of their off-season preparation within their yearly plan.

The first group was divided into male and female swimmers as members of Swimming Australia’s Talent Identification (under 18) Squad during a camp conducted at the Australian Institute of Sport (AIS).

In the water, each swimmer then performed 3 maximal effort tumble turns, with a 3-minute rest period between each swim turn. The researcher’s described their assessment as follows:

“The swimmer swam from 20 m out toward the wall at full speed, undertook the tumble turn, and swam at maximal effort back out to the 20-m mark. This distance allowed for capture of the full 15 m into the wall and back out to the 15-m mark as the overall turn time. Kinematic and kinetic turn data were obtained using a proprietary force plate system (“Wetplate”) instrumented and mounted within the pool wall.”

During the dryland tasks, the elite swimmers created more force during all 5 parameters for loaded and unloaded tasks.

In general, the elite male swimmers were ~30-50% more powerful than the subelite males.

In general, the elite female swimmers were ~35-45% more powerful than the subelite females.

Next studies need to asses if strength and power training can improve dryland force production and tumble turn time or if simply working on tumble turn biomechanics is the best method for improvement.

What do you think?