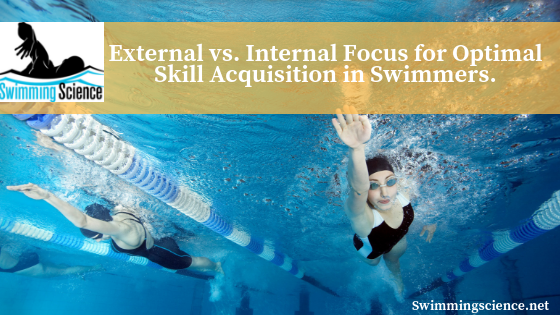 We all have various cues to communicate with athletes.  Everyone’s cues vary with style, audience, and available tools such as video.  Clarity is our goal with athlete communications.  “Feel” does not always equate to “real”, which is why video is so powerful.  Regardless of whether you use video or not, what matters most is how the athlete internalizes cues.  As video becomes more commonplace, our job as coaches is not only to pick out stroke flaws but also to translate cues into useable language with swimmers.
Think of our jobs as writing code for the computer in our athletes’ brains.  Without translating thought into the useable language (i.e. code), the program won’t run very smoothly.   Proper language makes good information useable, and our job does not stop with identifying the flaws and giving out drills.  Every cue follows a three-stage process:

Stage three is the most important and is often overlooked.  Automaticity in movement is the objective and is best accomplished via effective communication both between coach and athlete, but also via the athlete’s self-dialog.


The concept of internal vs. external focus is not to be confused with association vs. dissociation.  Association refers to staying in the moment during a task, such as being aware of your surroundings or monitoring your physical state to optimize timing of your surge at the end of a race.  Dissociation involves thinking about something other than your present task.  A classic example is thinking about your dinner plans during a set of repeat 1000s.  These are related concepts, but not the same as internal versus external focus.  Of course there is “losing focus”, which we never want to encourage.

Modern research has overwhelmingly supported external focus cues as most effective for skill acquisition.  In fact, the term “modern” is somewhat redundant since most of the literature supporting the superiority of external focus is new.  Some of this research may challenge what we think, since nearly everyone uses internal focus cues in some way.  You may find it disarming to remove all your cues that make reference to a body part (Try it…not easy!).  Fortunately, there are ways to reconcile research with practicality and explain ways we can apply these concepts in the unique aquatic environment.

Review of the literature

Early research in this field began with a series of balance tests in various studies.  For example, one study asked participants to keep a balance board level (Wulf 2001).  Some were told to think about keeping feet level; others told to keep the markers on the board level.   A control group was told to think about nothing.  In this study and in others of its ilk, the external focus groups have universally outperformed the other groups, including the controls that were given no instructions and theoretically should have had the clearest minds.  Similar data related to target accuracy has been shown in both novice and elite golfers.  Without fail, an external focus directed toward the golf club or at the target results in better accuracy than thinking about a body cue at all skill levels (Wulf 2007).

Research has quantified movement efficiency in context of external focus strategies.  In one study, subjects performed a bicep curl during which EMG data (muscle activity) was gathered (Marchant 2009).  The internal focus group was told to contract the bicep; the external focus group was told to curl the weight.  Control group was given no instructions.  EMG activity was highest in the internal focus group.  For movement efficiency when measuring a set load, a high EMG is not what we want because it shows that more effort is being used for the same task.  Efficiency is ability to use the least resources possible for a task with maximum benefit.

Where do we go from here?

The research is virtually unanimous that external focus cues outperform internal focus cues for skills involving precision, efficiency, endurance, and strength.  Does this mean all of our internal focus cues are wrong?  I wouldn’t go that far yet.  For one, swimming is a series of unnatural movements in an unnatural environment.  One hypothesis to distinguish swimming from the acts studied is that balance, aiming at a target, and running are all natural movements.  Even though our long-lost ancestors didn’t throw darts in their basement or play golf in their free time, they did use various implements to hunt down food.  Swimming is entirely unnatural and there is nothing intuitive in our brain’s movement development that can trigger a swim stroke with a cue like “visualize your target.”  The Freudenheim study did demonstrate the effectiveness of an external focus cue in swimming, but I don’t think we should accept the concept based on that study alone, which was conducted in a 16m pool.


Further, you’ll note that most studies involve the interaction of our body with some external object, such as a balance board, golf club, or target.  One of the biggest challenges in swimming is actually finding an “object” (i.e. a grip on the water) to hold onto.  In fact, I asked leading researcher in this field Dr. Gabrielle Wulf about “free floating” sports like diving or gymnastics and she acknowledged that the research is still developing in this area (Wulf 2008).

Using external focus imagery is most in-line with the literature, but as a practical matter we may need internal cues at the onset of interaction so the athlete knows what part of the body we are actually referring to.  There just isn’t much creative imagery to describe an early vertical forearm catch to someone who doesn’t know what it is to begin with.  Further, since it is not a natural motion like jumping or throwing, there isn’t some magic word to trigger the movement.
Stroke analysis in video should go beyond breaking down the stroke, but also guiding the athlete to appropriate self-talk language for their stroke keys.  Whenever possible, utilize external cues.  If you work with young kids, you are probably good at finding creative cues already!  If we can’t find an appropriate external focus cue for a movement, it may be a sign we’re not in the right place with that athlete.  In other words, if you NEED to cue into a body part (internal focus) to explain a movement, perhaps what’s really needed is a regression to a different drill or exercise.  According to the literature, cues should be distillable into external imagery.  Again, I think we can make concessions for the unique aspects of swimming, but ultimately this is the intersection of drill with skill.

One reason we emphasize fundamentals like breathing patterns and the “compact position” for the low back and shoulder girdle is to reduce the need for compensations at higher levels of skill complexity.  Optimize these basics, and higher level skills will develop with greater automaticity.  As the athlete masters basic forms of movement with less mental “noise,” higher levels of skill will become more teachable via simpler communication.