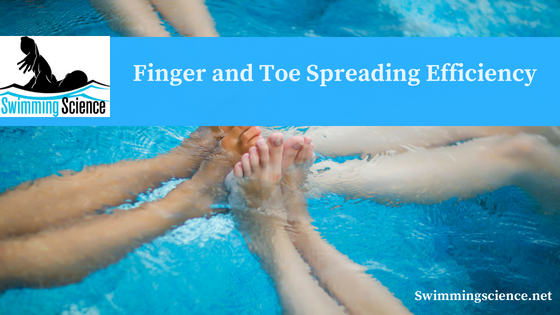 The position of the fingers and toes is seldom discussed on pool decks. Literature suggests a slight spread of the fingers maximizes propulsion. Moreover, the amount of spread is proportional to the speed of the moving object.

However, there is a debate if a larger paddle exerts more force on the surrounding water, leading to less efficient swimming.

This study looked to see if the spacing between the hands and feet was efficient, and what is the optimal distance if this spread was efficient.

It was found spacing the cylinders increased the amount of force produced. The amount force increased greatly with a higher number of cylinders. It was suggested the optimal spacing depends solely on the diameter of the two adjacent cylinders.

In the Reynolds range of 20 – 100, the researchers found that the optimal spacing is in the range of 0.2D – 0.4 of the diameter of the cylinder, and decreases slowly as Re increases.

This study confirms the notion of spreading the fingers. Not many studies known to this author have discussed or researched toe spreading in humans, likely as this ability is difficult and many studies suggest the legs minimally produce force in human swimming.