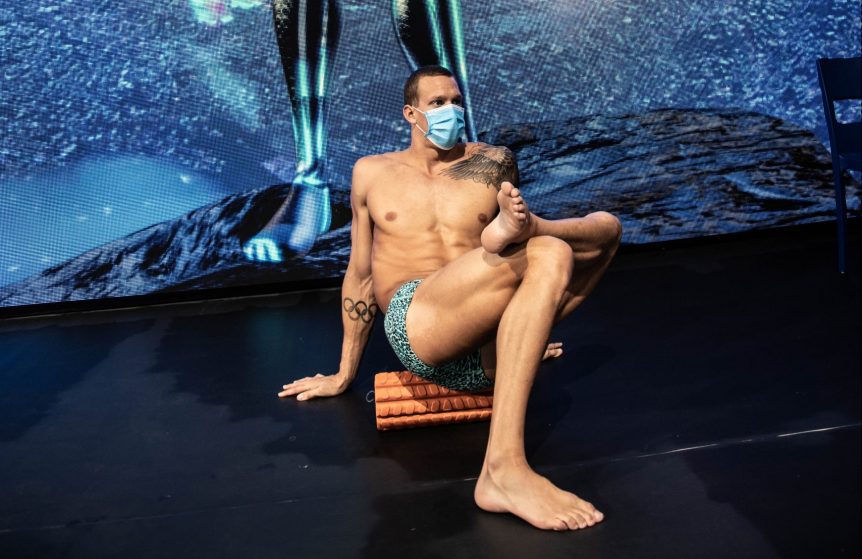 The mechanisms underpinning these significant ROM increases with rolling may be quite diverse. Muscle, fascia, and skin are densely innervated by sensory neurons. A variety of receptors respond slowly (Merkel: small receptor field and Ruffini: large receptor field) or rapidly (Meissner small receptor field and Pacinian: large receptor field) to pressure and force. Although their primary responsibilities are for proprioception, Ruffini and Pacinian receptors contribute to sympathetic activity inhibition (contribute to muscle relaxation). Ruffini receptors are more sensitive to tangential forces and lateral stretch, which would be characteristics associated with rolling. In addition, interstitial type III and IV are multi-modal receptors (i.e., pain and mechanoreceptors) that can affect sympathetic and parasympathetic activation decreasing heart rate, blood pressure, ventilation, and promoting vasodilation. Thus, they can also contribute to a more relaxed muscle with less resistance to movement.

Reduced muscle reflex activity can also contribute to a more relaxed muscle. Manual massage and roller massage have attenuated the Hoffman (H)-reflex by 40–90%. A decreased H-reflex may be attributed to decreased afferent excitability of the alpha motoneuron or increased presynaptic inhibition, inhibiting the reflex-induced activation of the rolled muscle.

Furthermore, a similar mechanism for stretch-induced increases in ROM as proposed by Magnusson may be a rolling-induced increase in stretch tolerance. The experience of pain or discomfort with either stretching or rolling can be diminished with prolonged exposure allowing the individual to move beyond the prior limit of discomfort to achieve a greater ROM. Pain perception associated with delayed onset muscle soreness, myofascial tender spots, and evoked stimulation have all been reduced with rolling. Pablos and colleagues reported an increase in anti-inflammatory proteins and a reduction of pro-inflammatory proteins, when foam rolling after muscle damage in mice, which resulted in improved muscle recovery and performance. Massage can also stimulate parasympathetic activation; with changes in serotonin, cortisol, endorphin, and oxytocin contributing to a decreased pain perception contributing to an increased ROM tolerance.

Thixotropic effects could also contribute to rolling-induced increases in ROM. The direct and undulating pressures of rolling can decrease the tissue fluid viscosity providing less resistance to movement.

The objective of this clinical commentary (Behm 2020) review was to appraise the rolling (foam rollers and roller massagers) literature to evaluate and recommend the exercise prescriptions that would provide large magnitude effect size improvements (i.e., volume [number of sets], repetition duration, rolling velocity/frequency, and intensity) for ROM and performance.

A total of 73 articles and 254 measures were used in the analysis.

Effect of Number of Sets on Range of Motion

When rolling, there were diminishing to trivial magnitudes of change with 5 (d = 0.056) or greater number of repetitions.

Effect of Rolling Set Duration on Range of Motion

Effect of Rolling Frequency (Speed) on Range of Motion

It was predicted large magnitude effect size for increased ROM with 2-second (d = 1.66), 3-second (d = 1.85), and 4-second (d = 1.00) rolls (duration of a single roll in one direction over the length of a body part), with small (0.417) magnitude ROM improvements with 1-second rolling frequency respectively.

Effect of Rolling Intensity on Range of Motion

The one way ANOVA indicated there was no significant difference between rolling intensities.

Effect of Number of Sets on Strength and Jump Measures

Effect of Rolling Set Duration on Strength and Jump Measures

Effect of Rolling Frequency on Strength and Jump Measures

Effect of Rolling Intensity of Strength and Jump Measures

With jump measures, only 2 intensities were reported with 70% (2 measures) and 100% (14 measures) of maximum discomfort or pressure displaying nonsignificantly different (p = 0.3) mean small and trivial magnitude ES of −0.37 ± 0.75 and −0.06 ± 0.24 respectively. There were no significant (p = 0.8) regression coefficients relating rolling intensity and effect size for jump height performance.

There were only 2 studies that investigated sprint changes with rolling with reported improvements of 1.2% (d: 0.85) and 6.2% (d: 0.24). There were insufficient number of studies to calculate regression equations.

The most important findings in this review were that to achieve the greatest ROM, the rolling prescription should involve 1–3 sets of 2–4-second repetition duration (time for a single roll in one direction over the length of a body part) with a total rolling duration of 30–120-second per set. Second, there were no significant findings for strength and jump measures with generally trivial-to-small magnitude rolling-induced performance deficits.

If you are looking for a specific routine and how to use foam rollers for swimmers, consider purchasing Mobility for Swimmers.