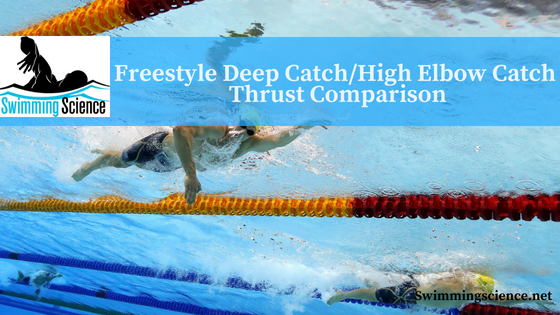 Much debate surrounds the ‘ideal’ catch in freestyle. Many suggest a high-elbow catch theoretically maximizing propulsion (‘drag-based’), while others believe in a low-elbow or ‘S-curve’ catch to maximize mythical lift (‘lift-based).

Unfortunately, the lift has only been theoretically determined in swimming, subjecting it to much scrutiny in the sport.

Videos of Olympic-level swimmers were analyzed with a finite-difference computational fluid dynamics (CFD) solved to solve the mass conservation and the viscous, incompressible Navier-Stokes equation. Flow velocity, pressure, and kinematic viscosity of the fluid are the variables sought in the equation.

During this analysis, free-surface effects such as waves and water-entry are neglected and the arm is assumed to be immersed in water throughout the stroke. Only the underwater phase was analyzed.

Since the hand generates the most force, the researcher’s defined drag as the ‘force in the direction of the flow relative to the hand, and lift as the force perpendicular to the drag force’.

Arm-pulls with excessive sculling is not as effective in producing thrust as styles where the hand is kept mostly normal to the direction of the trust. This difference was more prominent in the backstroke.

This study suggests in freestyle and backstroke lift plays an integral part in propulsion, suggesting the ‘lift-based’ theory. The findings in the study bring to light the importance of a straight line catch, to maximize force production. However, this limited study only analyzed a few swimmers, without indicating the event analyzed, questioning the validity of this study across all swimmers and distances.

This study supports a ‘lift-based’ theory, but not via sculling. Many researchers feel using video analysis designed for boats as inapplicable to swimmers.

It is also essential to realize the importance of lift and drag, it is likely neither one is the main contributor but work on a continuum, which must be individualized for success.

However, many sprinters utilize a straight arm catch and this is one potential explanation.