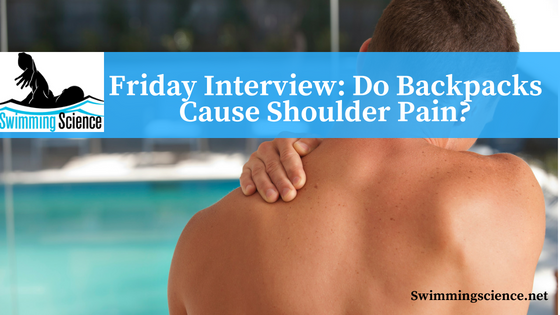 Below is an interview on swimmers use of backpacks, specifically answering the question: Do backpacks cause shoulder pain? Here is the latest article by Yoram Epstein, Effect of Load Carriage on Upper Limb Performance. Review the latest studies and complete research work sites here.

1. What research exists on the question, do backpacks cause shoulder pain? What is a swimmer risk of using backpacks?

The research on shoulder pain due to load carriage is not new and goes back to the early 1940s’. Carrying a backpack is found to cause many musculoskeletal injuries, mainly low back pains. It was noted that the shoulders are a region with the highest ratings of pain and discomfort; shoulder discomfort, even with a relatively low load, was rated as the most limiting factor for not completing a load carriage task (e.g. Holewijn 1990, Birrell and Hooper 2007, Wettenschwiler, Lorenzetti et al. 2015). Load carriage discomfort ratings are linearly correlated with the static peak pressures on the shoulders.

2. How are hemodynamics and neural function related to shoulder health?

Deformations of the soft tissue of the shoulder, especially in the region of the axilla and subclavian artery, can temporarily reduce the blood supply to the upper limb and compromise the neural function. This in addition to a direct compression of the brachial neural plexus. As a result, fingers numbness, reduced tactile sensation, and altered fine motor function are manifested. In more severe cases, a longer paresthesis or disability might occur, which sometimes are irreversible.

3. How did you measure these in your study?

4. What did your study find?

We found that load carriage resulted in an average decrease of ~40% in microvascular flow, and a significant decrement in light touch sensation, but not in thermal sensation and gross motor functions. These physiological effects were associated with a 34% decrement in function (e.g. accuracy of target acquisition).

5. Based on your findings, would you recommend swimmers use backpacks? And does using bookbags cause shoulder pain?

It is not clear to me why swimmers would use a backpack in their training regimen. If it is meant during out-of-water training aimed to strengthen leg muscles, I know that many years ago, they used this mode of training. In recent years, they moved to the Gym, which is much safer and more effective. For in-water training, if a swimmer, for example, is using a kicking board and maintaining the same shoulder-area posture for a more prolonged period this may be more similar to our study. However, in the more dynamic swimming case, which requires hands strokes there could be repetitive loads on specific, localized regions in the shoulder area which could induce damage.

6. If a swimmer insists on wearing a backpack, can they do anything to minimize the negative findings from your study?

I do not recommend to use backpacks by swimmers as part of their training. There are several undesired effects, which can hamper the swimming effectiveness. First, the compression on the soft tissue of the shoulder can cause a reduction in blood flow and deform the brachial plexus. Second, the backpack will reduce the biomechanical efficiency of the upper extremities. Third, you don’t need a backpack to strengthen your muscles. Therefore, I cannot recommend anything to minimize the negative effects resulting from carrying a backpack.