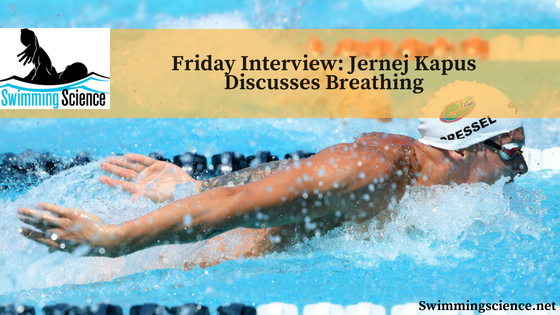 1. Please introduce yourself to the readers (how you started in the profession,

education, credentials, experience, etc.).
I am coming from Ljubljana, Slovenia. I’m an Assistant Professor at the University of Ljubljana, Faculty of Sport. I spent most of my childhood in competitive swimming. My swimming career was ended during the third year of study at the University of Ljubljana, Faculty of Sport. After finishing Bachelor degree (1999), I continued the study at Master (2004) and Doctor Level (2008). All that time I have been interested mainly in the influences of reduced breathing during swimming. During the final part of my swimming career, I often manipulated by breathing at the front crawl and fly swimming. At the beginning, it was very hard to reduce from usual (take a breath every second stroke cycle at the front crawl or every stroke cycle at the fly) to less breathing during swimming (take a breath every third, fourth, fifth stroke cycle at front crawl or every second stroke cycle at fly). However, after a few training sessions, I was adapted to these reduced breathing and improved swim times in these techniques as well. Considering these experiences, I chose this topic for my further research work. I started with the analyzing the acute (reduced breathing during the maximal or submaximal swim) and continued with the training effects.
2. You recently published an article breathing frequency and endurance exercise. What lung adaptations are we confident that occur during restricted breathing frequency and swimming?
Swimming produces unique challenges for breathing system i.e. breathing musculature and lung. Swimmers exercise in a horizontal or near horizontal position and are subjected to hydrostatic forces. Furthermore, swimming requires the ability to tightly regulate breathing pattern and flow rates that are much higher than during dry-land exercises. Considering this, the higher lung volumes are the expected consequences of regular swimming training. In our recent study, it was obtained that six weeks of cycle ergometry interval training with reduced breathing frequency (3 training session per week) increased vital capacity for 8 ±8%. However, it should be an emphasis that the subjects were students at Faculty of sport with no experiences in competitive swimming.
3. What did your study look at?
The aim of the mentioned study was to investigate the influence of training with reduced breathing frequency (RBF) on tidal volume during incremental exercise where breathing frequency was restricted and on ventilatory response during exercise when breathing a 3% CO2 mixture.
4. Were these athletes already trained?
Twelve healthy male participants participated in this study. As students at the Faculty of Sport, they were active but none were currently participating in a regular training programme. During the study period, they stopped their usual physical activity (recreational) and only exercised during the training sessions as part of the experiment.
5. What were the main results of your study?
The conclusion of this study was that the effect of RBF training during cycle ergometry was twofold. It increased tidal volume during incremental exercise where breathing frequency was restricted. In addition, it decreased the ventilatory response to exercise when breathing a 3% CO2 mixture, which suggests an increased tolerance to CO2 following such training.
6. How does this research help the coaching community?
The data suggest that swim training with RBF might permit swimmers to take fewer breaths and to hold their breath for longer, which would be of particular benefit during the underwater phases (flip turns, gliding, and underwater strokes) as well as providing an important biomechanical advantage. However, RBF training could not be realized during high-velocity swimming due to the additional stress caused by such a breathing pattern. Therefore, it seems that the combination of the two forms of intense front crawl training under different breathing conditions (swimming with RBF at a lower velocity and swimming with the usual breathing frequency at higher velocities) would be beneficial for competitive swimmers.
7. What questions still exist on lung adaptations to swimming?