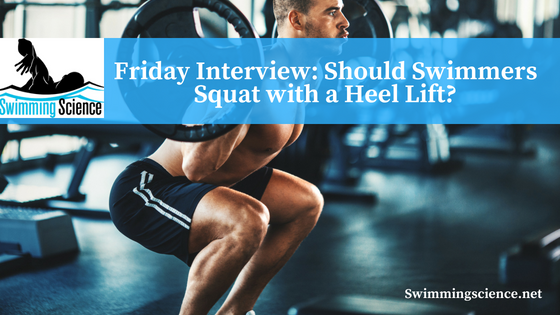 Below is an interview with Jesse Charlton regarding his latest research article on the effects of a heel wedge on hip, pelvis and trunk biomechancis during squatting in resistance trained individuals. This article related his research to swimmers, asking: “Shoulder Swimmers Squat with a Heel Lift?”

Jesse Charlton was born and raised in Vancouver, BC Canada and currently is completing his MSc at the University of British Columbia focusing on clinical biomechanics. He possesses a Bachelor of Physical Education and Coaching, specializing in kinesiology and coaching science from Douglas College (Vancouver). He has a deep interest in the interaction between technology and human movement to improve the treatment of musculoskeletal disease. In addition to his graduate studies, Jesse has over 5 years of experience as a strength and conditioning specialist, primarily working with power, field, and tactical athletes. Out of the lab and gym, he participates in a wide variety of sports including mountain biking, skiing, trail running, and judo.

1. What effects do heel lifts have on squatting?

Based on the literature as it stands today, there is a limited amount of data to consider. Previous work compared weightlifting shoes to various running shoes or barefoot conditions but did not report any measurements (i.e. heel to toe drop) regarding the shoe itself. Therefore, it is difficult to determine what the “heel lift” actually was. However, our study utilized a standard 2.5cm heel to toe drop, making a comparison between squatting with and without a heel lift possible.

When squatting with the heel lift, on average, participants performed the exercise with a more upright torso and pelvis. This was what we expected to occur. Though we can only speculate, we believe this result is due to the heel lift artificially increasing available dorsiflexion range of motion, thus allowing the knees to travel more anteriorly than previously possible. This results in the pelvis and torso, think the center of mass, staying closer to the base of support, allowing for the participant to remain more upright. Without the heel lift, the pelvis typically translates posteriorly due to the inability of the knees to travel forward. Consequently, the individual must flex their trunk forward to compensate and not fall over backward. It must be noted, however, that the heel lift that we examined did not reduce spinal flexion (often called “butt wink”) during squatting, which in addition to excessive forward trunk flexion, is a possible injury mechanism during squatting.

The heel lift did not alter the muscle activity around the hip joint and thigh either. However, we had participants squatting with an empty barbell, thus the physical demand was quite low, as all our participants were experienced gym goers. Greater loads would alter the activation, though I cannot say it would change the results we found. With hopes, future research will aim to compare a heel lift during different squatting conditions, specifically under different %1RM loads. This will provide a better opportunity to evaluate the differences in muscle activation that may be associated with a heel lift.

2. How does heel lift height influence squatting, how can someone determine the appropriate height?

As above, we do not know for sure, but through biomechanical reasoning, we believe the changes in joint mechanics, torso, and pelvis angles are due to the increase in ankle dorsiflexion range of motion. Essentially, when standing on a heel wedge or in a weightlifting shoe the ankle is placed in slight plantarflexion, relative to the normal flat-footed position. This allows for a greater ankle range of motion from the full standing position to the point at which the ankle joint can no longer dorsiflex. We can see this mechanism occurring in the gym all the time. Someone with restricted ankle range of motion will squat with a more vertical shin, forcing the femur and pelvis posteriorly. Consequently, the center of mass is moved back as well, requiring the torso to flex forward to compensate and maintain balance. As another example, we often see this with individuals who have naturally long femurs and shorter torsos. No matter how much ankle range of motion these individuals have, they will likely perform the squat with some degree of torso forward flexion. This phenomenon can be countered to some degree through the widening of the knee position during squatting (“knees out”). However, this also requires a fair amount of ankle mobility.

Finding an appropriate heel height for an individual is beyond the study we published. However, most weightlifting shoes have about 1.9-2.5cm of heel to toe drop. Occasionally, you see some of the larger Olympic weightlifters wearing a shoe with more drop. However, with a large height difference, the majority of the weight will be placed on the toes and will likely cause some stability issues, thus limiting the amount of load one can squat. This, of course, is counterproductive. I believe, though not necessarily based on any data, somewhere around 2.5cm should be adequate for most individuals.

3. Swimmers often have tight calves from all the kicking, how can a coach determine if swimmers should squat with a heel lift?

This is a great question. I would like to lead this with a preface. The use of a heel wedge should not be used as a “crutch” for those with tight ankles. Rather, it can be helpful in improving technique for all lifters, but athletes who have tight ankles and display altered technique, as a result, should be working with a qualified professional to determine the source of the ankle restriction and what needs to be done to remedy it. The heel lift can certainly be used as a way to allow the athlete to continue squatting with good technique while working to improve the ankle restriction. Importantly though, I don’t see anything wrong with all athletes using a heel lift while squatting in order to assist in maintaining good technique. It just should not be a way to bypass bad joint mobility. Particularly through the use of a weightlifting shoe, the athlete will get a boost in stability and force transfer due to the properties of the shoe, in addition to a heel lift. These are all good things.

4. Is there a benefit of squatting with and without heel lifts for improving the depth of squats?

Often it is easy to determine squat depth by measuring knee flexion angles. Though we found when squatting with a heel lift participants increased their knee flexion (more depth) by only 4.5º. However, if the goal is to squat to a deeper position and the reason someone cannot do so it due to an ankle restriction and its subsequent compensations, then yes a heel wedge could potentially assist in squatting deeper. Most importantly, however, the athlete will likely be able to squat deeper while maintaining safe torso and pelvis positions.

5. In swimming, the flip turn uses a squat with the swimmer on their toes. Do you see any point in practicing squats in this position?

I do not believe there is any use in performing barbell back squats (or its variations) in this position. I view the barbell back squat as a great exercise to develop leg strength and some hypertrophy, and as I mentioned earlier, squatting on your toes (or on a heel wedge/shoe with such a large heel to toe drop that you are on your toes) will reduce your stability, limiting the training loads you can use. This will reduce the strength and power adaptations you are aiming to garner from this exercise. Though having strong legs through squatting will be of value when it comes to jump performance and subsequently the forces an athlete can put into the wall during a flip turn, jumps and plyometrics are exercised more specific to both the position of the athlete during the flip turn and to the force requirements of the maneuver.

Overall, though my expertise is not in swimming technique, I would suspect maintaining a torso perpendicular to the wall during the turn is important, thus performing squats with a torso perpendicular to the ground (upright) would develop strength in those associated joint angles and be beneficial to the flip turn. Therefore, squatting with a heel lift could certainly be a useful tool, but I do not see much use in squatting on your toes completely.

6. What else do we need to learn about squatting technique, specifically in regards of heel lifts?

First, there is debate amongst clinicians and scientists regarding the optimal position of the knee during squatting, with strong arguments on both sides. Thankfully, we have begun to combat the myth that (healthy) knees should not pass beyond the toes during squatting. However, what is being debated is the position of the knee along the frontal plane (“knees out” versus “knees in”). This issue needs more attention; however, I suspect we will simply find that some individuals are better suited to squat with the knees aligned with the foot, and others can have the knees well outside of the foot. This is often the end result, the truth typically lies somewhere in the middle of two extremes and is heavily dependent on context. I bring this up, because squatting with a heel lift, whether it be through a wedge, shoe or otherwise, will likely result in greater translation of the knee over the toes. Therein the torque about the knee joint will be increased, lending the need to better understand the optimal position of the knee under these stresses.

Second, we need to better understand the “butt wink” or posterior pelvic tilt that is all too common in those performing barbell squats. Some of the work by Dr. Stuart McGill seems to indicate this butt wink is not ideal and could cause damage over time. Now, as modeling and motion analysis methodologies improve we should look to better understand what is occurring when someone is squatting and exhibits a butt wink. In a practical sense, we must understand that this issue may be due to motor control, mobility restrictions or both. Therefore, fixing it is not as simple as “mobilizing” something. As we found the heel lift did nothing to reduce butt wink, these initial questions are important prior to investigations aimed at reducing butt wink.