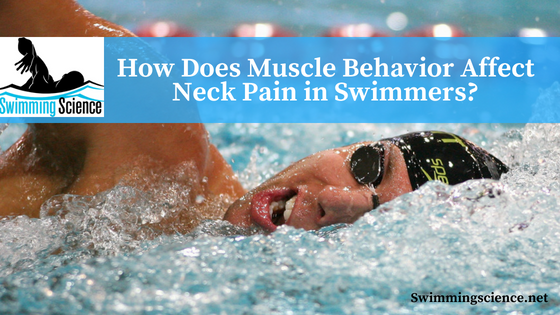 Neck pain is the fourth common source of pain in swimmers. Of the various causes of neck pain, mechanical neck pain is believed to be influenced by changes in muscle function.

Many muscles in the shoulder attach to the neck and spine, potentially altering movement patterns. The trapezius and levator scapulae are typically viewed to influence neck pain and dissipate loads from the shoulder girdle to the pain-sensitive cervical structures.

The trapezius is a large muscle, typically broken in two-three portions (upper, middle, and lower). Most commonly the upper trapezius is believed to influence pain in the shoulder. However, the trapezius’ influence on neck pain is rarely studied.

The purpose of this paper was to examine the behavior the three portions of the trapezius in patients with chronic mechanic neck pain (MNP).

Thirty-eight volunteers participated in the study (18 MNP and 20 control). Inclusion criteria were: a history of neck pain greater than 3 months, greater than or equal to 15/100 on the Neck Disability Index, visual signs of dysfunction, clinical signs of scapular dysfunction on the same side of the neck pain.

Surface electrodes were used to record electromyography (EMG) of the portions of the trapezius during isometric shoulder flexion, abduction, and external rotation at three different maximal voluntary contractions (MVC) 100% MVC, 50% MVC, and 20% MVC.

No pain was noted during any of the procedures for either group, but the lower portion of the trapezius displayed significantly greater levels of activity in individuals with MNP compared to controls for the abduction and external rotation. No differences were noted during the two other trapezius sites.

This suggests changes occur in the behavior of the trapezius in those with chronic MNP. This increased activity of the lower trapezius suggests an altered motor control during abduction and external rotation.

In swimmers with MNP, it is likely altered scapular muscle motor control is contributing to dysfunction. This indicates assessing trapezius muscle function in those with MNP.