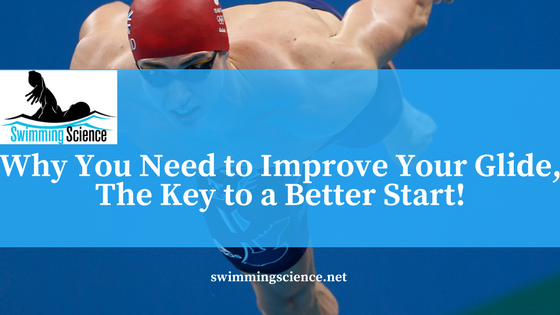 Many feel reaction time is the best spot to improve the swimming start, but little correlation exists between reaction time and starting ability. Instead, glide time is a modifiable variable which is gaining support and correlation with starting skill.

Elipot is the swimming starts guru, luckily his team has researched starts.

Research on Why You Need to Improve Your Glide

Don’t work harder than you need to work!

Swimming is hard enough, don’t make the sport any harder.

In another study, by Elipot, he and his colleagues looked at the glide time of four French National-level swimmers. These researchers studied when the loss of underwater start speed occurred during the glide phase of the start. The swimmers reached a velocity between 2.2 and 1.9 m/s after their center of mass covered a distance ranging between 5.63 and 6.01 m from the start wall.

“This study also showed that the performance during the underwater gliding motion is determined as much by variables at the immersion as by the swimmer’s loss of speed. It also seems that to hold the streamlined position the synergetic action of the knee, the hip and the shoulder is essential.”

Conclusion on Why You Need to Improve Your Glide

Instead of working on reaction time, concentrate on improving the swimmers gliding ability and glide length. Gliding ability appears to correlate with their ability to streamline, synergistically utilizing their knee, hip, shoulder, and core muscles. Glide length is a test of patience. Many swimmers want to get up and race, using more energy than required without the associated increase in velocity.

Dr. GJohn Mullen, DPT, CSCS is a World renowned expert and speaker in sports training and rehabilitation. He received his Doctorate in Physical Therapy at USC, as well as the Josette Antonelli Division Service Scholarship, Order of the Golden Cane, and the Order of Areté. At USC, he also performed research on swimming biomechanics and lung adaptations in swimming training. Dr. GJohn has worked with multiple professional and Olympic athletes, helping them earn Olympic medals. He is also a sports performance consultant, working with the Chinese and Philippine National Teams.