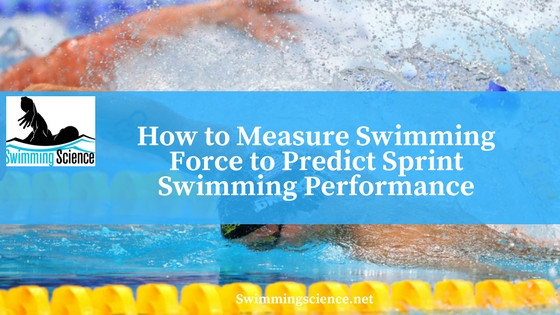 What is the best way to predict sprint swimming performance? Many coaches rely on test sets, pace work, past performances, and mid-season taper meets. But is there another way?

This study provides us with an alternative way to measure force and anaerobic capacity to predict sprint swimming performance.

This proposed method is low-cost, easy to perform and can be done in only 3-minutes in any pool (even those small hotel pools). You interested?

Read below for the review of the study, Relationships among the Tethered 3-min All-Out Test, MAOD and Swimming Performance.

Keywords You Should Know:

MAOD: The Maximal Accumulated Oxygen Deficit is considered to be a valid tool for estimating anaerobic capacity.

Tethered Swimming: Swimming with a stretch cord attached between the swimmer’s hips and the side of the pool. This anchors the swimmer so that they stay in relatively the same place.

To determine the relationship between a tethered 3-min all-out tethered performance and:

The most significant findings were:

The findings suggest that the 3-minute all-out, tethered test is a cost-effective, low equipment way of predicting short/middle distance swimming performance. Give it a try!

A dynamometer is not required to measure force. Other studies indicate that there is a linear relationship between the force measured by dynamometer and the distance the swimmer maintains from the start point. In other words, you can estimate swimming force by tracking the distance from the start point that the swimmer maintains throughout the test.

The significance of the findings are limited by a small sample size.