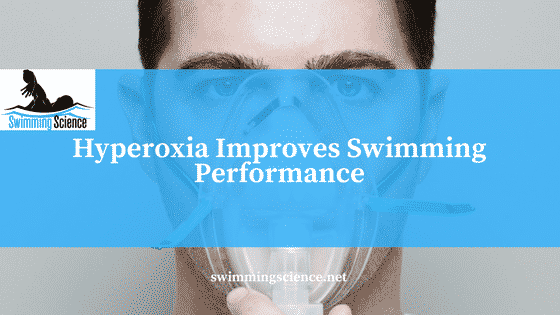 Oxygen is essential for recovery and breathing more frequently is believed to improve endurance capacity. In swimming, repeated exercise bouts are typical performed in meets and practice requiring a lot of oxygen for recovery.

Hyperoxia (respiration of air containing a higher partial pressure of oxygen than regular air) enhances the level of arterial hemoglobin saturation as well as the amount of oxygen dissolved in the plasma. Hyperoxic breathing is also known to augment delivery of oxygen to working skeletal muscle cells, as well as the diffusion of oxygen into the mitochondria.

These results suggest that the peak and mean power of elite swimmers performing high-intensity intervals can be improved by exposure to oxygen-enriched air during recovery.

Exposing athletes to hyperoxide conditions (oxygen enriched air) during recovery from high-intensity exercises enhances peak and mean power output. This suggests that elite swimmers might benefit from hyperoxide recovery during practice or meets with repeated sprint efforts. However, it should be noted that the link between findings from studies performed using swim benches and their application to real swimming is unproven and should be investigated further.

If you are considering hyperoxide, please consult your physician in advance.