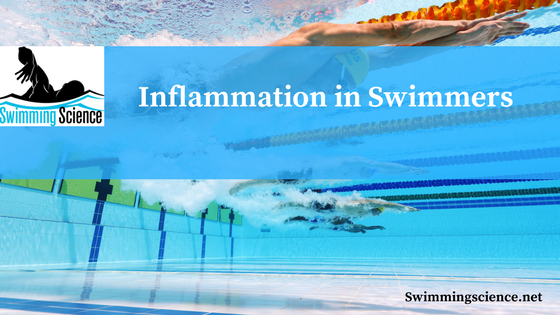 Below is an interview on inflammation with Dr. Rafael Casuso. You can view his Research Gate page here.

1. How can you measure inflammation response?

Cells produce small proteins called cytokines, some of them such as interleukins and tumor necrosis factors have inflammatory or anti-inflammatory effects. We are able to detect a particular cytokine by applying biochemical technics like enzyme-linked immunosorbent assay (ELISA).

2. Is this systemic or local inflammation?

Systemic inflammation. Cells produce the cytokines which are released into systemic circulation, these circulating cytokines are the ones that we quantified from the blood of the athletes.

3. What does inflammation tell coaches and/or researchers?

It can be used as a marker of adaptation to a given workout. In addition, together with some markers of muscle damage like lactate dehydrogenase or creatine kinase may reflect systemic and skeletal muscle adaptation. Therefore, a simple blood collection after a swimming test can easily reflect whether a mesocycle is enhancing systemic and cellular adaptations. Sadly, these biochemical techniques are still expensive.

4. You recently compared the inflammatory response of running and swimming. What were the results of your study?

We worked under the hypothesis that inflammation would be lower after swimming than after running during 8 bouts of 30s all-out workload. Indeed, swimming is performed under an un-gravitational environment and without important eccentric contractions (the opposite to running). Thus, we believed that the lack of muscle damage would be the explanation for a lower inflammation response to sprint swimming.

We found that swimming induced lower levels of interleukin 6 and cortisol (a stress-related hormone) than running. However, muscle damage parameters were statistically similar between running and swimming but, surprisingly, most of the subjects showed a higher muscle damage after swimming than after running. Suggesting that muscle damage is not triggering the inflammation response.

5. What are the practical implications for coaches in your study?

If taken together sprint interval training elicit lower metabolic stress when performed by swimming than when performed by running. Thus, the first application can be that swimmers can perform more high-intensity session per week than runners.

However, it is also known that interleukin 6 is released from skeletal muscle to regulate some metabolic pathways. Indeed, we recently published that high-intensity swimming may elicit different early adaptations within arm skeletal muscle than those previously reported for legs. Suggesting that swimming coaches cannot base their training periodization, especially during highly intense mesocycles, based on what it is known for other sports such as running or cycling.

6. What can swimmers do about inflammation?

The most important thing is a good planning of the rest periods after hard workout sessions and/or mesocycles. In addition, sleep disturbance is known to increase systemic inflammation while taking a nap may decrease it. Therefore, enhance sleep quality in periods of hard workouts may help to manage exercise-induced inflammation.

It should also be noted that in the present study we found lower potassium level after swimming than after running. Although the precise mechanism is unknown this may result in skeletal muscle fatigue development. Then, during repetitive high-intensity swimming bouts, swimmers may benefit from ingesting liquid supplements directed at accelerating potassium homeostasis recovery.