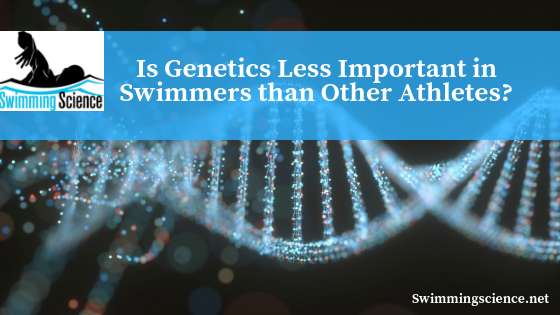 Genetic contribution to athletic success is clear, but each gene makes a small contribution to overall genetic profile. Identifying genes which contribute to elite success can help predict athletic potential. Recently polymorhpisms to the GH-IGF-I axis are believed to promote excellence in endurance and power sports. C-1245T is a genetic variation in the promoter region of the IGF-I gene, which the T allele being the minor allele. Presence of the minor T allele was associated with higher circulating IGF-I levels.

In the past we’ve written extensively about genes and the 10,000 hour rule proposed by Erickson. Erickson has recently described the 10,000 hour as 10,000 deliberate hours of practice instead of simply performing 10,000 hours. However, this idea has been frequently dismissed by many, suggesting genetics play a role in human performance.

The frequency of the IGF-I promoter T allele polymorphism was significantly greater among athletes (9.2%) compared with nonactive controls (2.4%). An even higher frequency was found among strength athletes (11%) compared to team-sport athletes (7.8%) (Krych-Garsztka 2015).

Unfortunately, most of the genetic research is dedicated on ground-based sports, which may provide little information to swimmers.

In contrast to the hypothesis, the prevalence of the AA genotype was significantly lower in the swimming group as a whole (35%) compared with the control group (46%), in particularly due to reduced frequency of the AA genotype among short-distance swimmers (26%).

The results of the current study suggest that in contrast to elite endurance and power track and field athletes, single nucleotide polymorphisms of IGF-I and the IGF-IR were not frequent among elite Israeli short and long-distance swimmers.

While a favorable genetic predisposition is essential, psychological and environmental factors, including training equipment and facilities, nutrition, familial support, and motivational factors, are also imperative for top-level sports development. Moreover, the technical element of swimming may reduce the importance of genetic contribution in sprint and endurance athletes. It also may leave the potential for even greater performance if the genetically gifted athletes enter the sport of swimming.