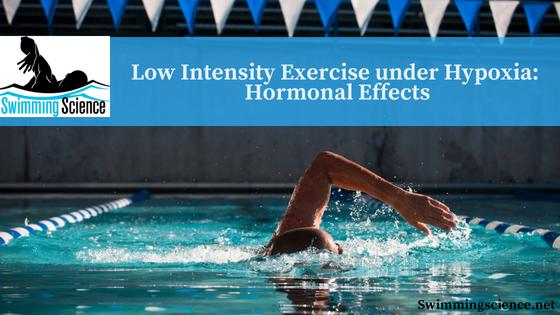 This study “examined the effects of low-intensity resistance exercise under acute systemic hypoxia on metabolic and hormonal responses”.

Then the subjects returned to the laboratory for the two trials:

Both resistance training protocols included bench press and leg press, each with 14 repetitions for 5 sets at 50% 1RM.

This study suggests performing low-intensity resistance training under system hypoxic conditions results in similar results to local ischemic conditioning in a hormonal release. These researchers suggest their results may help athletes in sports where resistance training during the season is essential for maintaining muscle mass.

In swimming, out of water strength has yet to be correlated with swimming success. Therefore, these applications outside of the pool may have a minimal contribution. Moreover, future studies on systemic hypoxia need to use performance and strength as dependent variables.