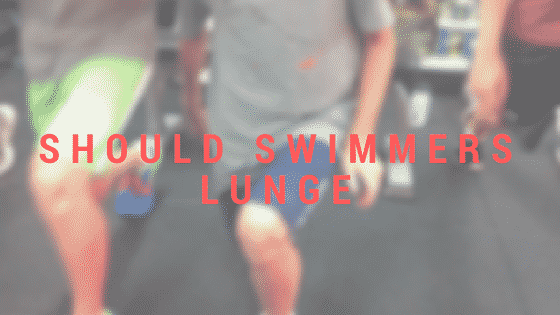 Take Home Points:
Most exercises have a proper time and place, if dosed and performed with correct biomechanics. Unfortunately, the lunge is one of the most incorrectly performed exercises, despite the common use in the swimming community. I can’t tell you how many times I see swimmers performing god awful lunges (specifically walking lunges), only to see them with knee pain later in the week or a few years down the line. This unacceptable practice is perpetuated by many swim coaches claiming dry-land is meant to prevent injuries, when they in fact are likely increasing the risk of injury (Krabak 2013). Now once again, there truly are few bad exercises and the lunge is not a poor exercise, it just contains a lot of bad implementation.

How the Lunge can be Dangerous

One of the biggest benefits of dry-land is helping prevent the repetitive demands of swimming. Unfortunately, many breaststroke swimmers [learn how to swim the breaststroke] already have a lot of repetitive stress on their medial knee structures, causing lax ligaments, which can be perpetuated by poor lunge biomechanics. To ensure proper form, safe progressions and regressions, as well as knowledge in biomechanics is a necessity. Simply put, most coaches (not only swim coaches) do not have this education, as they spend their necessary time on learning swimming biomechanics, going to swim meets, season planning, etc. This makes it crucial to find someone who is qualified, at least in exercise prescription and biomechanics. This can be as simple as a parent volunteer who is also a strength coach, who can at least monitor exercises properly. Now, if you are working with a volunteer strength coach or someone without a background in swimming, specific criteria are mandated, as bodybuilding principles are not likely the most beneficial for swimming. Now, some may argue these principles can work, we all must realize although results may correlate during years of maturation, it doesn’t mean it caused improvement. If you are a coach with an interest in becoming educated, take a strength and conditioning certification. Note, not a simple class focused on swimmers, these courses have their time and place, but in my opinion, should be used to complement the base knowledge of strength and conditioning.

When we’re talking about lunging we want to focus on clean, crisp, and efficient movements. This is actually far from the norm! Here are the main lunge flaws in dry-land:
Error #1: Forward Lean
You’ll see this quite often in people who are tight in their hip flexors/quads or are very quad dominant. You may need to do some SMR of the hip flexors, along with glute activation work. The SMR work can include foam rolling to the thighs and the glute activation can be as simple as glute squeezes.
Good coaching cues to break this habit include keeping the chest up throughout the movement and resetting yourself between reps if necessary. With some people it’s an actual structural issue (as in the above example), where as with others it’s either being lazy or not using the correct cues. Reset and think “tall” before each and every rep.
Error #2: Knee Caves In 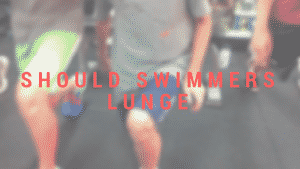 This is a very common issue in people with weak glutes, as the gluteal muscles are mainly external rotators, which control the femur.
When we lunge and are forced to absorb/create force on one leg, we’re immediately challenging our gluteals to provide stability and strength in the frontal and transverse planes [learn more on our basics page]. When our glutes are inactive (or simply not strong enough), we can’t properly decelerate hip adduction/internal rotation, and therefore our knees cave in.

Once again, some glute activation prior to the lunge can help clean this up. Try some simple glute squeezes for the novice athletes, or some side-steps/4-pt hip ext.

One set on the weak hip should be sufficient; after all, the goal here is neural activation, not gluteal exhaustion.

Coaching cues include keeping the core tight, landing on the heel, landing under control, and keeping the majority of the pressure on the back/outside of the foot.
Error #3: Foot Caves In

Typically if someone’s knee caves in, his foot caves in as well. This is the term for overpronation.

The second scenario is common in those with weak glutes (just like above) causing the knee to collapse which can transfer all the way to the foot.

Coaching cues include forcing your big toe into the floor to stabilize the arch of the foot. Another cue is to contract the glute, preventing hip collapse as before.

Once again, every exercise has a time and place. To understand the proper time and place, a coach could perform an out-of-water screen to help connect the dots between their out-of-water movement patterns and in-water deficiencies. Now, these two areas don’t always connect, but if someone can’t control their knee motion during a single lunge, then it is likely their knees are excessively stressed during the breast kick. The difficult thing for a coach, is realizing that even though the swimmer may not have pain during the kick, that over time this increased stress can default these structures and cause pain.

However, simply prescribing the lunge for each swimmers is not enough for a coach, finding the most appropriate form of the lunge is key. Now, this may sound simple, but for continued improvement, it is necessary to find the form of the lunge where a swimmer can perform correctly for multiple repetitions, but be challenged and fail without mental engagement or fatigue. Once again, finding this place may take a few sessions, but with the screen, the time can be cut-down.

The lunge can be a highly effective dry-land exercise is dosed and performed properly. As a coach, “doing no harm” is mandatory. Make sure you are not doing harm, instead helping prevent injuries and benefit your swimmers, while they swim and later on in life!

For an individualized dryland, check this out!