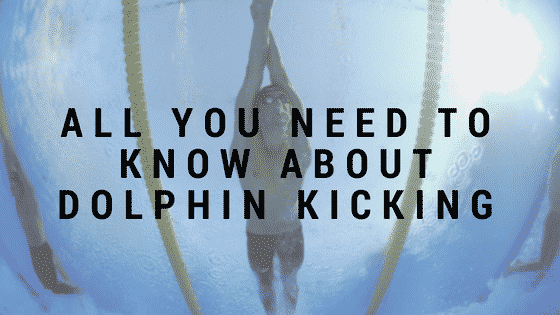 After watching NCAA footage, one fact becomes increasingly clear each year: dolphin kicking correlates with success [arguably in all strokes, including breast…].

This trend is clear, but not too long ago, dolphin kicking was discouraged, as “experts” thought surface swimming was superior to underwater dolphin kicking. As you see, we have become far since this era, as more research surmounted and people went against traditional thinking.

This series will discuss the basics of dolphin kicking and before we delve into the biomechanics and current unknowns, understanding why dolphin kicking can be faster than surface swimming is mandatory.

First things first, the further you are underwater, the lower the drag coefficient. Marinho et al. (2009) measured the amount of drag during gliding underwater.

Conclusion
As you see, the deeper the better, but there is a point of diminishing returns. Moreover, each individual has a different profile in the water and different drag coefficient. Combine this with general biomechanics and you have a much more complicated equation. Once again, research only takes us this far, then the principle of individuality applies.

We have discussed both of these topics indirectly on Swimming Science, eloquently by Chris Plumb in Beep, Beep, Beep and in Groin Kick Syndrome: Part I. Now let us discuss them in more depth.

Once again, using a tempo of 0.40 – 0.45 is recommended for elite dolphin kickers, but finding the ideal tempo for each person, the principle of individuality is a necessity. Unfortunately, too many poor dolphin kickers attempt kick with a large amplitude and slow kick, when a quicker tempo may fix their slow kicking! Some feel this tempo may not be necessary, as compared to cetaceans humans take a lot more kicks, even at the same velocity (von Loebbecke 2009). However, the applicability of comparing a human to a cetacean is questionable, as different biomechanics and fin/foot size also play a significant role.

More research is needed on the ideal kick number for elite dolphin kickers, however the principle of individuality likely plays a large role for each swimmer.

Strouhal number
The Strouhal number is rarely discussed in coaching circles, but is a dominant discussion in research despite not being correlated [yet] with dolphin kicking performance (von Loebbecke 2009). For coaching, it is crucial to realize this number is somewhat combines underwater dolphin kicking tempo and velocity.
In Physics it is expressed as:

Elite humans have a Strouhal number around 0.8 – 1.2, but more research on this value is necessary.

Conclusion
In the future, more sophisticated methods, like the Strouhal number, may be applicable for measuring skill level. Until then, finding your ideal kick tempo and number are necessary for underwater kicking success. This makes practicing at a fast pace essential for isolating and ingraining these aspects.

Here is another article written by Dr. Tiago Barbosa on kicking orientation power.

I decided to compare Ryan Lochte’s dolphin kick power in the men’s 200 free event in the prone (front) and back positions at Kazan 2015 and London 2012. As you may have noticed, he changed slightly the turning technique, performing the underwater dolphin kick on his back in freestyle races. Check the video of his race last June at the Speedo Sectionals in Athens, Georgia.

There is a mathematical model to compute the kicking power. The model was originally developed for fish and eventually it was adapted to humans. Amid the excitement of Lotche’s performances and all the talk about the new technique, I have decided to compare his kicking power. This will measure the power of one kick in three separate instances, as opposed to the average power generated in the entire underwater portion:

It seems more or less obvious that one expects higher power outputs during the semis than the heats of a major competition. The surprise, though, is that with the new underwater technique he reached a higher power output during the Kazan’s heats than at the Olympic Games. I am wondering if he was “testing” the technique to check if should use it later on at the semis and the final. Or maybe things were getting too tight; he was drifting behind and thought “I better turn on the turbo to catch these guys.” 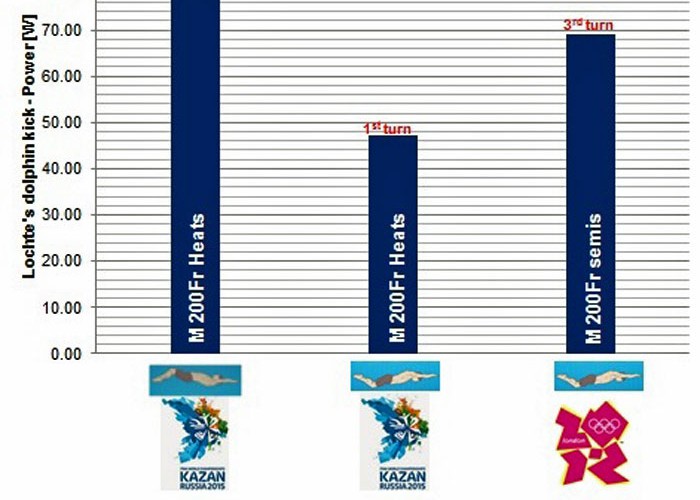 Comparison of power in one kick from Ryan Lochte in various positions. Courtesy Swimming Science

Having said that, please do not rush to the swimming pool and immediately start performing underwater dolphin kicks in the back position. Pace yourself, because there are some things that we must acknowledge. First, Lochte is an elite underwater kicker ,and few in the World that can rival him. Second, we shared the findings only for three kicks. We need more evidence and some comprehensive research on this to clearly advise one to change the turning technique (unless that one is Lochte). However, we do know that when gliding in the lateral or back position, the drag force is lower than the prone position (Marinho et al, 2011).

Last but not least: Consider that the turn depends on several other factors that I did not consider today, such as the depth and efficiency of the kick. It is clear, however, that Ryan Lochte is faster kicking on his back than any other position.

Some other coaches suggest kicking on the side to prevent wave disturbance, as kicking on the front may impair a complete down kick (as the waves crash into the floor of the pool). However, it is likely one could argue the lane lines and other swimmers provide similar disturbances (once again, I haven’t seen any specific data on this, but is simply a thought, intelligent readers, correct me if I’m wrong).

Equal Kicking
Other coaches suggest kicking on the side hoping to cause an equal up and downkick. This is quite specific to each individual, as some will kicking on their stomach will have a stronger downkick, causing them to surface earlier. However, the strength of the hamstrings (the main upkick muscle group) is typically 60 – 75% the strength of the quadriceps (the main downkick muscle group) (Jenkins 2012). This strength discrepancy suggests a difference in kicks always exist and it is unreasonable to expect an equal kick.

This article seems like a short bashing on side underwater kicking, but it was meant to emphasize the principle of individuality. Remember, no size fits all, especially when you are comparing other animals. Hopefully, the research will look at underwater kicking orientation and speed, but this research won’t provide all the answers, as racing conditions are much different than laboratory models. Instead, trying different orientations is necessary and following trends in the elite swimmers, and from my analyses, the majority elite underwater kickers are not on their side.