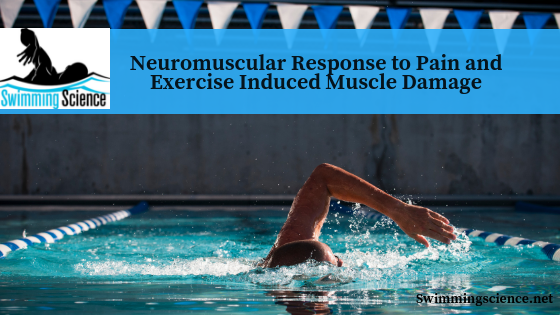 Muscle soreness and pain are common sensations following a bout of unfamiliar exercise. This is believed secondary to lengthening and damage of the muscle fibers resulting in inflammation. Moreover, this damage results in changes in neuromuscular function and force production.

Surprisingly, this decrease in force is not seen until 12 hours following exercise, perhaps due to pain not occurring until 12 – 24 hours after exercise.

The “aim of this study was to investigate the effects of exercise induced muscle soreness (EIMD) and determine whether the relationship between the peripheral symptoms, the neuromuscular changes and delayed pain sensation and cortical alpha-1 and alpha-2 activity (Platter 2012)”.

Then, the exercise group performed an EIMD protocol, where they resisted the lengthening movement of the left biceps for five sets of twenty-five movements at 80% of each subject’s maximum isometric contraction torque.

Seven participants’ data was not used due to dropout and insufficient EEG data. There was a significant increase in pain, arm circumference, joint-angle of the elbow, serum creatine kinase (CK), and many brain EEG readings (alpha-1, alpha-2, etc.), in the experimental group following the EIMD protocol. There was a decrease in muscle function in the experimental group.

The EIMD group appears to have successfully recorded muscle damage in this protocol. The increase in alpha-1 activity in the somatosensory and motor cortex is thought to be a result of altered perception. Moreover, this activity may be due to altered movement planning. Overall, this increase in activity may be necessary to counteract the loss of movement steadiness and force output while experiencing EIMD.

Alpha-2 had increased activity in the ipsilateral fronto-parietal areas as well as the contralateral fronto-central areas. This may be due to dissociation between the sensation of pain and the changes in neuromuscular function.

This study suggests the delayed muscle soreness is due to increased cortical areas in the brain, not physiological adaptations in the muscle. However, this physiological release could cause the increase in cortex size, therefore further work is necessary to differentiate the cause from effect. The central governor phenomena is important in sports, as fatigue and
pain are common, yet poorly understood in the context of designing training. Moreover, it suggests the importance of pain mediated in the cortex.