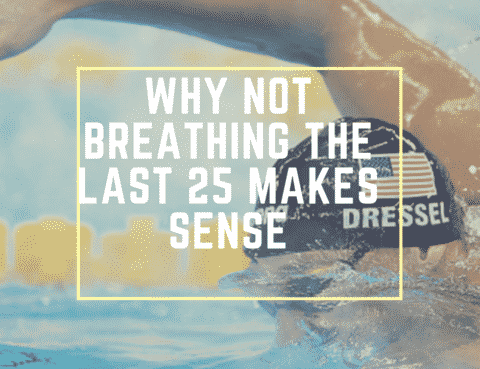 One of the biggest upsets at the 2017 Men’s NCAA Swimming Championships was Caeleb Dressel defeating Joseph Schooling in the 100-yard butterfly. Not only was the win an upset, but his time was astonishing and his race plan is out-of-this-world.

Dressel, America’s most dominant yards sprinter, did not beat the defending Olympic Gold Medalist with his blistering early speed. He caught up and passed Schooling on the last 50 yards.

An interesting note in his performance was that he did not take a single breath during his last 25 yards!

Over the years, I’ve written numerous articles on breathing techniques for swimming and how inspiratory muscle fatigue impairs performance.

One of the breathing techniques for swimming that I often suggest is to breathe more during races, particularly early in the race, compared to many coaches. I’ll admit, however, that the idea of not breathing the last 25 yards seemed not only inhuman but also intriguing. Therefore, I had to think about the physiological adaptations of breathing during swimming.

We believe not breathing early in a race not only limits oxygen delivery to the muscles creating fatigue but also causes inspiratory muscle fatigue. It’s seldom that we’ve considered not breathing at the end of a race and the following physiological adaptations:

How not breathing on the last 25 yards influences inspiratory muscle fatigue is not well known.

We’ve seen research on various breathing techniques for swimming. Some have suggested breathing every five strokes could increase inspiratory muscle fatigue more than every three strokes. However, how long it takes for inspiratory muscle to set-in has not been well researched.

“As breathing has the potential to disrupt stroke mechanics and streamlining (at least during front crawl), reducing breathing frequency is advantageous.  However, this has to be balanced with the need to supply the muscles with oxygen. If you breath-hold at the end of the swim, then it follows that you can recover post swim without swimming being negatively affected by the lack of oxygen (assuming you get the timing right of course).  In addition, in order to tolerate the breath-hold you need a reduced sensitivity to CO2 as this is what drives the urge to breath – hence hyperventilation allows you to breath-hold for longer and this is why free divers hyperventilate before their dive: the downside is that if you get it wrong you probably die!

We have shown that if you undertake endurance training (cycling) with a reduced breathing frequency, this can improve your toleration to CO2 and this, in turn, should reduce the urge to breathe. Interestingly, it has also been shown that IMT can help protect against the negative changes in blood gases during restricted breathing exercise (by increasing tidal volume).  Based on this you could hypothesize that both IMT and breath hold training would allow swimmers to hold their breath for longer. So, to get back to your question (sorry, a long-winded response), to tolerate breath holding you need to attenuate ventilatory sensitivity as this will reduce your urge to breath. Reduced frequency breathing training is an appropriate way to do this.

Regarding the impact of breath-hold on IMF…interesting question.  As far as I know, no one has actually looked at this.  However, I would hypothesize that it would get worse –not better (but this would be impacted by breath hold time).  This might at first appear to contradict what we know i.e. the magnitude of IMF is greater when breathing frequency is reduced because tidal volume goes up to compensate, meaning that inspiratory muscular work increases.  Now, if you’re not breathing, then there won’t be an increase in the ventilation-induced inspiratory muscle work during the swim.  But, respiratory acidosis is likely and hence so too is hypercapnia and probably local hypoxemia, depending on the duration of the breath hold. I’m also ignoring here the role of the collective breathing musculature in stabilizing the torso –  this will have an energy cost.  Hypercapnia and hypoxemia will reduce the exercise ability of the muscles, hence why it would make sense that IMF would be worse, but I don’t know that for sure.

If IMF does go up, then does it really matter?  I guess the answer depends on when your next swim is.  If you have sufficient recovery time then probably not, but if you don’t have sufficient recovery time, then it probably does. So, should more swimmers be trying breath-holding – probably yes, but getting the timing right is critical. Otherwise it can go horribly wrong from both a performance and safety perspective. Consequently, I wouldn’t recommend trying it the first time in a competition.  Rather, increase the duration gradually during dedicated training sets (this also assumes that swimmers are fit and healthy and there are no medical reasons why they shouldn’t be doing it i.e. the usual caveats apply). ”

The last element for not breathing the last 25 yards is the mental fortitude of the athlete. At the end of the race when fatigue and discomfort are at the highest, how many swimmers can perform an extremely challenging and painful task?

The more I’m involved with the swimming and synchronized swimming world, the more I learn about shallow water blackouts. Luckily, swimming (speed swimming, as the synchro community calls it) has Bob Bowman and other top coaches advocating against this.

If not breathing the last 25 becomes more common (which I think it will slightly increase), other timers, officials, swimmers, and coaches must keep an eye on swimmers as they finish. Luckily, in a competition, eyes are often on the swimmer. Seeing one go back underwater at the end of a race is uncommon, therefore, they should be easily spotted if the swimming community is cognizant. This differs from a crowded practice with less eyes on the pool and swimmers doing various tasks.

If you think you have the mental fortitude and your swimming breathing mechanics are faulty, consider not breathing the last portion of the race. Begin with 10-m, then continue to progress as you see how your body responds with this style. Start during practice, but be careful about shallow water blackouts.

Yes, Mr. Dressel may have done an amazing task which worked for him, but remember what works for others, won’t necessarily work for you!

If you’re looking for a tip for improvement, however, start small, progress, and track your performance. The swimming community just needs to be more aware of shallow water blackouts during practices and meets as more swimmers try this task.

One last thing from Dr. Lomax:
“Also, did Caleb fully breath-hold or did he periodically expire (i.e. trickle exhale) during that time?  The latter might reduce the urge to breathe more but it could also diminish any performance benefit derived from an increase in lung volume improving buoyancy (just a thought).”

Be safe, good luck, monitor your progress when trying out some of the best breathing techniques for swimming, and swim faster!