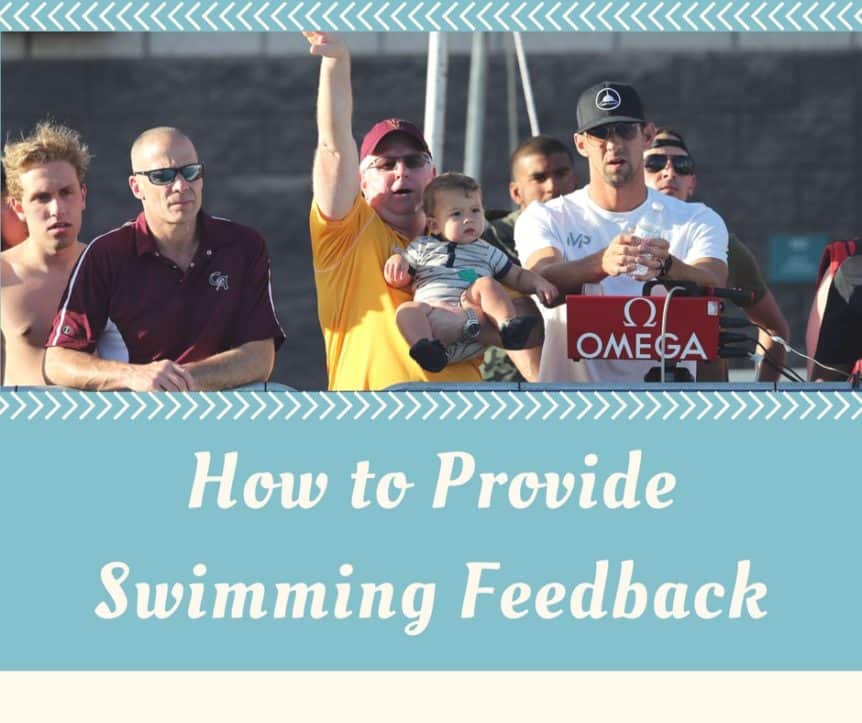 There are several considerations for optimizing swimming feedback:

Timing – How soon after the task do you offer feedback?

Frequency – How often do you provide feedback? After every length (novice swim lessons) or between sets with advanced swimmers?

Extrinsic vs. intrinsic feedback – Examples of extrinsic feedback include verbal cues or watching a video. Generally, extrinsic feedback is associated with skill acquisition. Intrinsic feedback involves how the body internalizes the desired feeling. Intrinsic feedback is more associated with retention.
Mode of delivery – Visual, auditory, tactile (I suppose taste may also be a possibility gulping down salt water in open water swimming!)
Real time feedback is the most direct and possibly the most reliable. It is fairly common in mental training using biofeedback where athletes train to voluntarily control physiological responses and are guided by real time feedback on heart rate, blood pressure, respiration. Think of Nintendo Wii as real time for movement, as it is actually gaining use in both rehab and fitness settings. Closest real-time swimming application that I’m aware of is the mirror on the bottom of an Endless Pool (the Michael Phelps swim game notwithstanding…).
Although formal study with real time swimming feedback is scant, real time feedback has been shown effective in gait retraining. Crowell (2010) studied a sample of female runners using accelerometers to track ground impact forces. Subjects were instructed reduce ground impact forces based on real time data received via their accelerometers. Subjects not only were successful during this task, they also retained this skill during a no-feedback condition and during the cooldown.
Perhaps more directly relevant to swimming…Weon (2011)attempted to resolve scapular winging by using real time feedback to monitor upper trapezius and serratus anterior activation. Subjects with scapular winging were cued to activate these muscles which are both shoulder upward rotators. Winging often results when the dominant scapula movement is adduction. Real time feedback on muscle activity led to increased activation from 2.3 to 5.9% greater than the starting condition of these muscles.
Most importantly, subjects were tested under both feedback and non-feedback conditions, with the feedback conditions producing the most significant improvements. Real time muscle activation feedback isn’t practical in our daily lives, but the general concept holds since we’re dealing with the same brain: the closer you get to real-time, the less interference you receive from other stimuli. I don’t believe this study represents the value of voluntary muscle activation, but rather the utility of this type of feedback. Muscle activation is simply an output that is easily measured in a lab.
The closer you get to real-time, the less chance you have to confuse the athlete with other stimuli. As we discussed in external vs internal focus cues, how we communicate verbally can be significant for skill acquisition and retention. Real time feedback is extremely powerful, as it has been shown to help reorganize one’s own body schema. Consider the famous mirror box experiments used to treat phantom limb pain in amputees. Visual feedback of a fake, non-painful limb allows amputees to adopt the fake limb as their own, often curing the phantom pain.
The frequency of feedback…most coaches wish we could provide more frequent feedback visually, as with diving or golf where you could video every single rep if you choose. Thanks to iPhones and iPads this is becoming easier with swimming. Timing and frequency are often related. Recently Coach Shoulberg described how Germantown uses VASA trainers to offer frequent and prompt stroke feedback, which isn’t always realistic in the water until rest intervals. However, the optimal frequency can depend on many factors…stage of learning, maturity, individual preference.
Feedback can be extrinsic or intrinsic. Ultimately our goal is to maximize intrinsic feedback, but extrinsic feedback is often a prerequisite. One example of both combining extrinsic and intrinsic feedback is the pulley system described by Coach Shoulberg… the faster you go, the harder the task becomes. If the task becomes harder, you know you’re doing something right (because you’re going faster). Likewise, added resistance exposes weak spots in the stroke. Similarly, watch when someone with a poor catch uses paddles without the wrist strap for the first time. They get instant feedback when the paddle goes flying off their hand with the first pull.

More is not always better: not only can too much feedback cause paralysis by analysis, there’s also a phenomenon called the “guidance effect”, whereby skill retention is impaired if the individual becomes dependent on feedback. You need a system to wean the athlete off feedback. Butki (2003) conducted a golf putting task with varying modes of feedback. Authors found that feedback after each trial resulted in a quicker acquisition, but worse retention. Groups receiving less feedback had worse skill acquisition than the complete feedback group, but better retention when feedback was later completely removed. A target skill isn’t a perfect analog to swimming, but the concept still holds.
Feedback is not a perfectly linear process. Anderson (2001) tested this very process in a target shooting exercise. Subjects performed an initial test with eighty trials having either immediate knowledge of results (“KR”) or delayed KR. As with Butki above, immediate KR led to superior acquisition but worse retention, whereas retention was best with delayed KR. Delaying knowledge of results by one or two trials led to the best results for retention in the retest. An analogy to swimming might be to delay feedback until after a set, rather than between reps. Of course, this can vary based on set length, but this is just one example of how these study results might be applied.

Conclusion on How to Provide Swimming Feedback

Is the priority skill acquisition or retention? Answering this question should help refine the appropriate method of feedback used to communicate. For acquisition, offer feedback frequently. For retention, still, provide feedback, but wean the athlete away from extrinsic feedback so they can internalize the feedback for themselves, by using their own sensory cues.

References on How to Provide Swimming Feedback

Written by: By Allan Phillips. Allan and his wife Katherine are heavily involved in the strength and conditioning community, for more information refer to Pike Athletics.Originally Posted 5/29/2012.