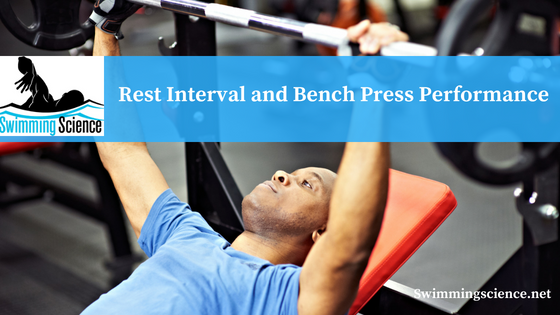 Past studies have found reset interval length between sets and exercises has been shown to affect metabolism, hormones, and cellular immune response to an acute bout of resistance exercise.

Studies have shown that during sets performed near muscular exhaustion, repetition number and total volume load decrease with each set in succession when 30-sec to 2 minutes rest intervals were used. The acute reduction in resistance exercise volume
observed with short rest intervals (less than 2 minutes) result in a slower rate of strength gains compared to longer reset intervals (2 – 4 min).

However, these previous studies have been scrutinized as strength, not gender, may be the reason for differences noted above.

The goal of the study was to investigate the effects of rest interval (RI) length on bench press performance in subjects with the disparity in maximum strength.

Two subject cohorts with a significant disparity in maximum muscular strength were investigated. Subjects performed three bench press protocols in random order consisting of 3 sets of up to 10 repetitions with 75% of their one repetition-maximum using either 1 (1RI), 2 (2RI) or 3 (3RI) min rest interval. The first cohort consisted of twenty-two men and women and was studied to investigate the possible influence of gender on acute bench press performance.

In the second cohort, twenty-three men were tested for 1RM bench press strength and placed into a low or high 1RM group.

Manipulating the RI lengths during bench press produces difference performance effects in subjects with great disparity of maximal strength. An acute bench press with 3RI results in inconsistent performance, bar velocity, and power, but is compromised in 1RI. This is believed to result from the length of recovery for the energy system.

For power and strength, rest intervals of 2 or 3 minutes are typically suggested. However,
the present study indicates that acute resistance exercise performance varies among
individuals with the disparity in maximal strength.