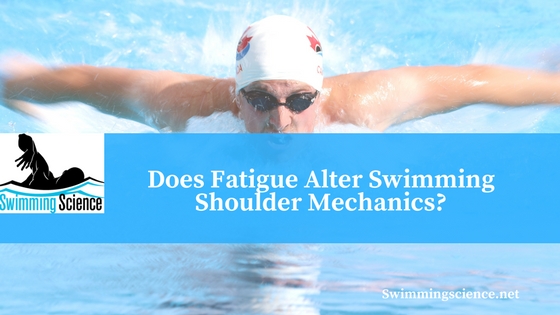 There are many factors that contribute to the high prevalence of swimming shoulder pain. High repetitions of overhead activity, muscle imbalances, range of motion deficits, poor posture, poor stroke mechanics (and many more) are all thought to play a role.

A recent article published in the Journal of Bodywork and Movement Therapies investigated the effect of fatigue on swimming shoulder mechanics by analyzing movement before, during and after a pool training session. Check out the informative study below!

20 competitive swimmers who practiced at least 6 x 1.5 hours of pool training per week were recruited for the study. Patients also filled out the QuickDASH (Quick Disabilities of the Arm, Shoulder, and Hand) questionnaire and were asked to report the highest level of shoulder pain (using the Visual Analogic Scale, VAS) that they experienced during the past week at swim practice.

Shoulder flexion x3 and abduction x3 were recorded at three different time points: before practice, 60 minutes into practice and after practice (90 minutes). All tests were recorded with a video camera for later analysis.

Videos were analyzed by 2 physical therapy students in their last year of study. Each trial was scored as either (+) positive or (-) for scapular dyskinesis and had to be agreed upon by both students.

Though scapular dyskinesis did not correlate with pain levels, this study did show that scapular kinematics are more severely altered at the end of a training session compared to the beginning. This is likely due to fatigue of the scapular stabilizing muscles. This can place swimmers at an increased risk of injury especially at the end of practice.

Scapular dyskinesis is partly due to the decreased endurance of the shoulder stabilizing muscles. Therefore, it is important to assess scapular motion in swimmers after a fatiguing activity to determine the severity of altered movement mechanics.

Aim: To evaluate the prevalence of scapular dyskinesis (SD) in competitive swimmers during training
sessions.

Methods: Repeated measurement observational study. 20 young competitive swimmers were filmed
before, at midpoint and at the end of a training session, performing shoulder flexion and abduction. SD
was examined separately by two assessors. Demographic and Quick Disabilities of the Arm, Shoulder, and
Hand questionnaires were collected.

Results: SD was observed in 30% of the swimmers before training, in 70%, an hour later, and in 80%, upon
completion of the training session. The difference between the baseline and mid-practice was close to
significance (p-value = 0.055), and between mid-practice and end of practice was significant (p = 0.004).

Conclusions: This study confirmed that the prevalence of SD increases throughout a training session in
most swimmers. The main reason might be fatigue of the muscles which stabilize the scapula, therefore,
when examining a sportsmen’s shoulder, it is important to examine the SD post-training or following
simulation of the training session in the clinic.