Several weeks ago, Amanda Smith raised the compelling issue of the top arm breakout. An informal case study on the Tennessee Volunteers revealed a break with swimming tradition, with all four members of the national championship 200m freestyle relay squad employing this technique. A key take home point from this article was “[The] top arm breakout keeps your line and tight, through all that turbulent water, at the last moment then sliding you through the surface of the water (Smith 2013).”
To continue this discussion, we at Swimming Science further examined this technique through the underwater video archives. What did we find?

Maybe the highest profile swimmer to utilize the top arm breakout is Park Tae Hwan, shown here in the 400m finals at Beijing. Perhaps most interestingly is how uses BOTH the top arm and bottom arm breakout in the race. He starts with the top arm, but midway through switches to a bottom arm breakout. The first shots are taken at the 50m turn where he turns with the right arm on top and breathes right (see more at Sun Yang 1500 Swimming Stroke Analysis London 2012). 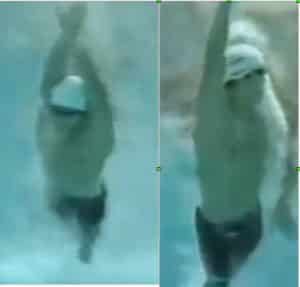 If there is any impediment to the top arm breakout, it is breathing preference and timing. Consider these guys named Thorpe, Hackett, and Sun. Though many right handed (or right breathing) swimmers turn left off each wall, these three all turn right. You might describe the turning sequence as: 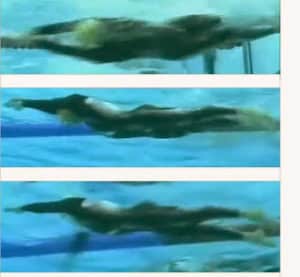 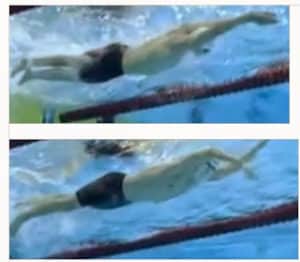 There are four different permutations on how a swimmer can go after the tumble portion of the flip turn while on their back:

For each of the three swimmers shown above, it’s possible a top arm (left arm) breakout would distort breath timing, as each breathes right immediately after the wall. However, comparing to Park in the first photo set, there is far more rotating that takes place underwater.

If you don’t test, it’s just a guess. We all must respect the hard data upon which the Tennessee staff is basing their strategies. But it would also be a mistake to assume identical outcomes with different set of bodies, as there are multiple permutations of turn direction, breathing patterns, and stroke asymmetries (learn more about turns:

In sum, greater acceptance of the top arm breakout is unlikely to spark the same revolution as the underwater dolphin or the undulating breaststroke. Change can be hard, especially at the higher levels where breathing patterns are habitually ingrained with thousands of turns. But with individual optimization, this technique may have the potential to save precious seconds at all distances. Also, being able to breathe immediately off a turn, may have an advantage for decreasing inspiratory muscle fatigue. Nonetheless, individualization for the person and and race (Read more about inspiration and swimming: Individual Breathing Patterns are King!:Breathing in Swimming: Breathing: During Sprinting: Friday Interview: Dr. Mitch Lomax).

Reference:
Written by Allan Phillips is a certified strength and conditioning specialist (CSCS) and owner of Pike Athletics.
Originally written 10/17/12.