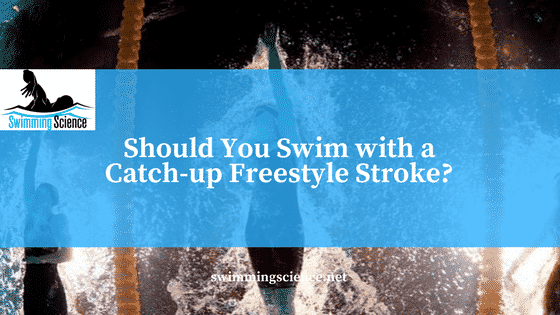 Below is an interview on the role of the catch-up freestyle stroke with Dr. Mathias Samson, Ph.D. It is based on his research article: The role of the entry-and-stretch phase at the different paces of race in front crawl swimming.

1. Please introduce yourself to the readers (how you started in the profession, education, credentials, experience, etc.).

I am a coach of swimming for 15 years, as well as a teacher who studied physical education. I coached in a club for years, and I worked with youth swimmers in particular, at the national level. Since 2007, I work at the University of Poitiers, and I handle the formation of students in swimming (theory and practice). I studied mechanics which was finalized by the obtaining of the diploma of Master's degree in research and development in Mechanics of the University of Poitiers. I pursued a Doctoral Thesis concerning the understanding of unsteady mechanisms engendered by the aquatic strokes of arms in crawl, in various paces of swimming.

2. You recently published an article the entry phase of freestyle [catch-up freestyle], could you explain your findings?

The research shows that the entry-and-stretch phase has an important function in the global organization of the swimming, in particular when the pace of swimming varies. It has two main functions:

So it varies according to the pace of swimming. Moreover, this phase has the highest amount of variation (in particular, in term of duration and trajectory). However, all the authors do not agree on its definition or on its function:

Is it propelling or not?

When does it end?

3. Based on the findings, what common misconceptions exist regarding the entry phase and catch-up freestyle?

The first misconception, is that this phase would serve to decrease the drag forces through the effect of a bulbous bow. This is not strictly a misconception, but it needs to be tested. In hydrodynamics, a "bulbous bow" applies only in some very specific configurations (length ration of the bulb and the boat, the sinking parameter, velocity of a boat). Another one is to believe that this phase remains identical according to the pace, with a tense arm forwards. However, this phase varies greatly, especially with changes in pace.

4. Do you think elite swimmers could do anything better during the entry phase? 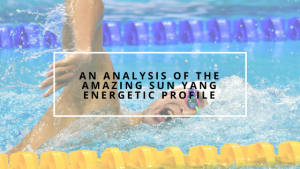 Read about his energetic profile here.

This phase has to allow to coordinate a number of actions (balance of body and breathing), and it occurs at the same time as the important propulsive phases of the opposite arm (insweep and upsweep), also it does not have to create drag forces. However, it does not have to be a moment when the swimmer keeps the tense arm forward by thinking that drag is decreased while the other arm propels. It is always a compromise between a time of glide and a propelling time: perform too much catch-up freestyle, the performance can be impacted. So, it has to occur as fast as possible and be capable to assure a propulsion the body, to aim at a continuity of the propelling actions of the arms. For this, the orientation of the arm does not have to be only forwards, but already in rotation downward (the catch phase). However, it depends on the stroke frequency of the arms, but also anthropometric characteristics of the swimmers. For example, Chinese Sun Yang, Olympics champion to London in 2012, swam the 1500 NL in 14 ' 31 ", with a tense arm forwards during all the phase of propulsion of the opposite arm, but he remains an exception.

5. The drag or lift debate persists in coaching circles, what are your thoughts?

This debate has existed for over thirty years. In particular, for the works of Counsilman. Lift forces, having been highlighted by Schleihauf in the seventies, have fundamentally changed the view of propulsion, and numbers of authors or coaches have adopted this point of view linked at a sinusoidal kinematics. Then we attended during these last years in a kind of step backward, during which authors have had tended to favor the importance of drag forces (cf. the “mea culpa” of Maglischo in particular, at the end of the nineties). But, these views did they fundamentally changed the technique of swimmers, it is difficult to say? Researchers, conducted over the past 20 years, both in towing tank and by pressure sensors measurements, suggest the importance of the two components in contributing to propulsion, with perhaps a dominant drag during the insweep phase. These studies should be continued. I believe, that aquatic arms trajectories are sinusoidal. In addition, most aquatic or aerial mammals propel themselves with sinusoidal trajectories to adapt themselves the most of the intrinsic characteristics of the environment (deformable and incompressible). I think we still have much to understand about the swimmer propulsion mechanisms. Also, do not reduce this complexity to a simple lift or drag debate, these two forces exist. There is more to understand how these two components are formed, going beyond the theory of Bernoulli, which is now known is insufficient to explain the mechanisms of creation of these forces because the flow is highly turbulent.

6. What are the common flaws during the entry phase?

For a novice, the main flaw is:

Skipping the entry-and-stretch phase (which should begin when the opposing arm is in the propulsive phase).

Skipping this phase prevents the swimmer from the following:

For the expert swimmer, the main flaw is to:

This flaw creates a long gap (a dead zone) after propulsion is created, in particular in the sprint and middle-distance paces.

7. How can people improve these flaws?

For the novices, it is necessary to learn to swim with the arms in opposition.

For the experts, this flaw is difficult to correct, because this long entry-and-stretch phase often allows them to be very efficient in propulsion with the opposite arm. One of the means to improve it this is to work on the stroke frequency, at characteristic frequencies of the paces of race:

8. What are your thoughts on "feel" or "motor control" during the entry phase?

I think that both are important. The specificity of the aquatic environment, imposes on the swimmer, to feel the flow of the water around its body to interact there better. Besides, the swimmer is more isolated than other athletes when they train. This isolation reduces the external feedback available. When progressing a swimmer only on "feel" the coach is risking it not adapting to the racing pace. The coach needs to ensure not too much is lost in the "feeling", in particular on the duration of the entry-and-stretch phase which must be adapted to the specific speed of each race, like not having too much catch-up freestyle in shorter events.

9. What research or projects are you currently working on or should we look from you in the future?

I'm researching the flow caused by the movements of the swimmers (in particular the arms), in the various paces. I think that the trajectory of arms have a certain coherence, like the flapping of the wings of birds or the fins of fish. However, we are not conceived to evolve in the water, except our capacity of buoyancy [maybe]. The created flow, fundamentally turbulent and unsteady, is an important topic as it is occurring in the water and play a preponderant role in the swimmer propulsion. Unfortunately, most of this flow is invisible to the human eye, quite as is it the flow around the wings of birds. To visualize and to understand these structures would provide a better understanding of swimming biomechanics. It is the aim I set for myself, and for it, the Prime Institute of the University of Poitiers has successful and modern search tools (PIV method, dynamometric balance, towing tank, CFD) to help with this endeavor.

Looking to improve your biomechanics and swimming? Get instaneous feedback to your swimmers with the Swim Coach Communicator from FINIS. Use coupon code 'swimsci' at checkout and receive 25% off!