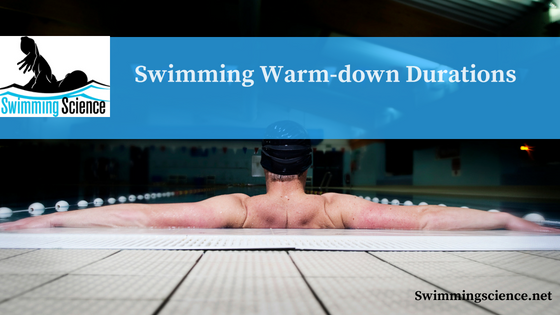 Warm-down is a difficult area of compliance. Many swimmers want to stretch in the shower and get out of the pool, unfortunately, warm-down is essential after practice, races,

I have discussed sprint swimming recovery and velocities for swimming warming down duration, but a recent study by Vescovi, Falenchuk, and Wells (friend of the site, read Friday Interview: Dr. Greg Wells) tackles warm-down durations. Highest blood lactate (Bla) was noted after 100 and 200 races, but the stroke swum was insignificant (Vescovi 2011). Similarly, a study looked at running and determined the 400-800 sprints to produce the highest lactate (Kindermann 1977), which is believed to be secondary to the high use of the glycolytic system (Wells 2009). Sex differences are noted between men and women (Bonifazi 1993). Vescovi 2011 only noted a sex difference in the freestyle events. Breaststroke has been determined as the lowest energy consuming stroke (Bonifazi 1993, Avlonitou 1996, Sawka 1979). IM is believed to cause the highest lactate concentrations, causing 25-60% greater post-race Bla (Avlonitou 1996, Sawka 1979). The difference in opinions between warm down speeds and duration. One study determined swimming for 15 minutes at 55-75% of racing speed resulted in blood lactate retuning to below 2 mmol/L-1 (McMaster 1989). A

more recent study has determined the lactate threshold as an optimal pace for warm-down (Greenwood 2008). Toubekis 2010 found repeated sprints to recover best at a pace of 40% 100 free.