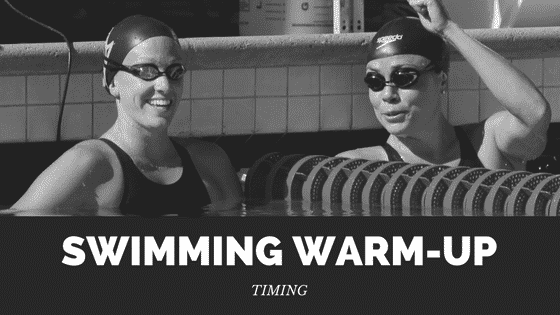 One important question we haven’t specifically addressed is “How long should the warm-up end before the race?” Intuitively we know that going straight from a warm-up session to the blocks may provide insufficient recovery for a max effort.  Likewise, whatever benefits we derive from a warm-up may evaporate if the warm up ends too long before the race.  How short is too short and how long is too long?

First, it’s clear that reality will often trump idealism.  Some meets are conducted with only a mass warm-up before the meet, and no opportunities for in-water warm-up once racing beings.  When you do get in the pool faster swimming is often impossible due to the seventeen other swimmers in your lane.  So despite what the research is, reality may require adjustments (That said, everyone is equally burdened by suboptimal conditions, so complaining is fruitless!).

Frequently swimmers race multiple events in a meet, so a more common scenario may be multiple races separated by multiple warm-ups and cooldowns.  Are there any guidelines for that scenario?  In a study previously reviewed here, Toubekis (2008) studied swimmers in two 100-m time trials separated by fifteen minutes.  After experimenting with several active and passive recovery variations, results showed that five minutes active recovery during this fifteen minute period was the superior strategy compared to ten minutes active recovery and any duration of passive recovery.

Though excess delay between warmup and competition may be detrimental, insufficient recovery between hard efforts may impair performance.  Toubekis (2005) put swimmers through an 8 x 25m sprint workout followed by a 50m maximal effort sprint five minutes later.  Recovery between 25m efforts ranged from 45 seconds to 120 seconds of active or passive recovery.  Despite other research showing that a period of active recovery is beneficial during long waits, active recovery between 25m repeats not only slowed subsequent repeats in that set, it also impaired 50m sprint times.

Most likely this research confirms what most coaches and athletes observe intuitively: some break is needed between the warm-up and the race, but waiting too long will be detrimental to performance.  If racing multiple events, a brief period of active recovery is preferred over passive recovery.  However, it is also possible that slow, sloppy stroke mechanics during recovery swims may infect motor programming for subsequent races in the meet, which may validate the use of active dryland recoveries.

If you can’t get back in the water, the most important qualities to preserve are body temperature and heart rate.  Keep parkas and sweats handy and perform a light dry-land warm-up before/between events if you can’t get in the water for a true warm up.