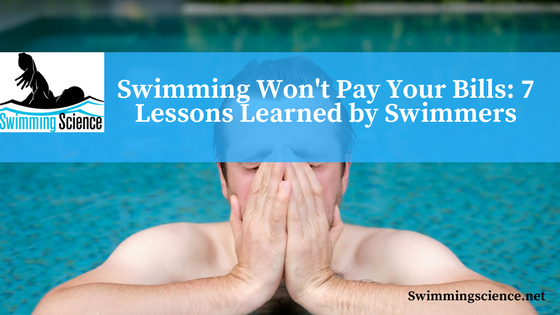 Thirty-six years beside the pool and there are still things that haven’t changed. Perhaps it’s a matter of sports culture, of respect for a sport that is not valued as highly as it should be, of the efforts made by swimmers who unhesitatingly give the best of themselves in the water and who, in some cases, would like to receive greater and fairer recognition of their dedication.

There is one sentence that hovers at the back of their minds. They hear it often in the pool or at home. It strangely seems to echo louder when they are going through a rough patch or when their academic results do not reach their family’s expectations.

It may well be that this expression has its logic that is also expressed at times of anger and frustration which is caused by the difficulty that comes with channeling the academic and athletic destiny of the athlete. That is when we put a blindfold over our eyes and choose the middle ground, and we ignore the benefits that our sport can offer.

I believe it demonstrates a certain lack of understanding because swimming offers a series of benefits and opportunities that are as obvious as those which I describe below and that more than counterbalance a sentiment such as this.

The reason why a swimmer comes to the pool to train for several hours at a time is not for the money. It is to reach a goal that satisfies their needs and gives them a boost in their lives. It is also because of a passion for an activity that inspires them, motivates them and fills them with positive energy. Perhaps it is a question of a personal drive to overcome obstacles.

Some people will only have a desire to enjoy their time and will come to the pool in order to feel more alive, and to create that sensation of freedom they seek so strongly.

To feel satisfied and happy with the activity they perform and that completely fulfills their aspirations.

These reasons are what drives a swimmer to push themselves so hard for hours on end. They also obtain an endless list of beneficial values or virtues that should, by themselves, justify the utmost support and empathy.

It is possible that, at first sight and with few exceptions, it does not offer the economic recompense to justify the effort and sacrifice required by this activity. However, I believe that the personal gains and achievements described above and the personal dividends that come with the sport do indeed more than justify the practice of swimming.

Too many reasons for them all to be taken into consideration.