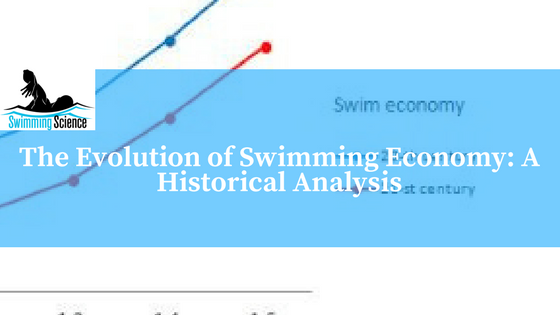 Everything started this week. I needed to kill some time and went online to watch videos on YouTube. Please don’t ask me why, but at some point, I was already with my jaw dropped watching races from the 1940s, 1950s, and 1960s. I realized how astonishing I was. In those days, with almost no science & technology to support them, what they were able to! Then putting myself together, I recalled that long time ago I was invited to deliver a talk about swimming economy and if the swimmers from the 21st century are more economical than the 20th-century counterparts and why. So I decided to update part of that talk, re-calculate some data and here we have this post.

The aim was to understand how economical the swimmers became in the last century or so based on what was reported in the literature. In 1944 was published one of the first papers comparing swimming economy between the main strokes used in those days (Karpovich and Millman, 1944). In 2006 was done one of the most recent comparisons between the four swim strokes in high-performance swimmers (Barbosa et al., 2006). Between 1944 and 2006 several other papers were also published and included in this analysis. So the analysis covers a 62 years period.

Till around the 1980s movement economy was done in absolute values (i.e. lO2/min or cal/min) and not normalized to body mass (i.e. mlO2/kg/min). So, swimming economy was re-calculated using the original data after converting it to lO2/min. Thereafter, metabolic power (Pmet) was extrapolated or interpolated to selected speeds. If swimming economy improves over several decades, it is expected that at a given speed metabolic power will be lower (Figure 1). 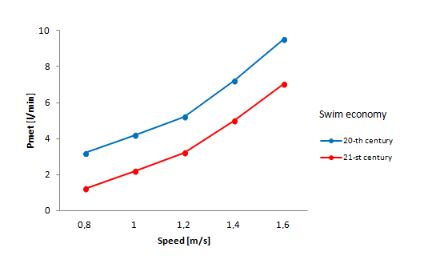 Front: Front-crawl became more economic over time. If we compare data from the 1940s (Karpovich and Millman, 1944), 1970s (Holmer, 1974) and 21st century (Barbosa et al., 2006) between 1.0 and 1.4 m/s this is quite obvious (Figure 2). Surprisingly, at higher sub-maximal speeds Monpetit’s swimmers were more economic (Montpetit et al., 1988) than the ones tested by Barbosa et al. (2006).  At that speed, probably the anaerobic contribution will increase and likewise the metabolic power. Montpetit et al. (1988) did assess the aerobic contribution, but any anaerobic pathway; while Barbosa et al. (2006) computed the metabolic power from aerobic and anaerobic lactic pathways. Therefore, one might consider that Montpetit’s data is slightly underestimated in about 30 to 40%.

Back: Same trend can be seen for Backstroke. Backstroke economy did improve (Figure 2). Interestingly, Alves et al. (1996) reported a higher economy than Barbosa et al. (2006).  Two explanations for this: (i) Barbosa and Alves selected different methods to assess oxygen uptake (direct oximetry vs. backward extrapolation, respectively); (ii) it seems that on average Barbosa’s swimmers were heavier than the ones recruited by Alves. Since I did the comparison of the absolute economy, body mass is a major confounding factor. Now you see why movement economy should be normalized to body mass or other scaling factors. It is easy to follow that heavier swimmers will have more lean mass, more cells and need more oxygen.

Breast and Fly: Breaststroke and Butterfly are also more economic nowadays (Figure 2). Just to call your attention that Karpovich and Millman (1944) did not assess butterfly stroke but breast-butterfly. The technique is characterized by performing breaststroke kick sync with the butterfly arm stroke and was very popular at that time. To have an idea how popular this technique was, in the 1948 London OG, six finalists raced the men 200 breaststroke performing this technique and all finalists adopted it in the 1952 Helsinki OG (Menauds and Zins, 1979). Eventually in 1953 FINA separates the breaststroke from the butterfly events and the breast-butterfly was no longer allowed. 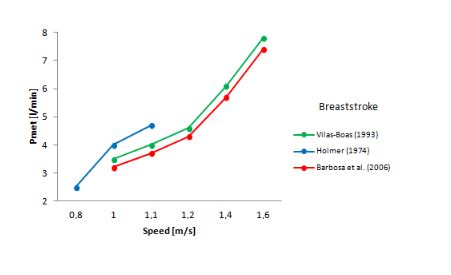 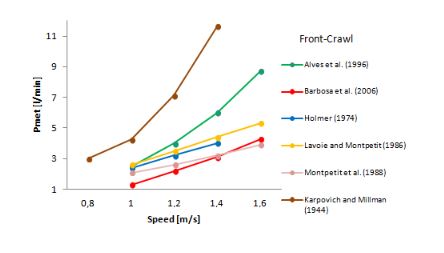 Figure 2. Comparison of the swimming economy in the four strokes over several decades.

All in all, it can be concluded that swimmers became more economic over the last decades (Table 1). The economy improved roughly 40 to 50% between 1940s and 1970s, 60 to 70% between 1940s and 21st century. What are the reasons for such improvements? I could be very academic listing the causes, but how about have a sneak peek at this movie from late 1940s (link, around the time Karpovich and Millman carried out their research), OG 1972 (link, close enough from Holmer’s paper) and OG 2008 (link, even though unfortunately Barbosa did not assess the US squad…)? Just to have a clue, the men 100 free WR was 55.9s (Alan Ford, US), 51.22s (Mark Sptiz, US) and 47.05s (Eamon Sullivan, AUS) in 1944, 1972 and 2008 respectively. Pay special attention to the swimming pool (e.g., starting blocks, swim lanes, walls), swimwear (e.g., caps, googles, swimsuits) and swimmers themselves (e.g., hair, mustaches, body shape, swim techniques). So different, right? As we speak, swimming is a very “high-tecky-tecky” sport indeed.

By Tiago M. Barbosa that earned a PhD degree in Sport Sciences and holds a faculty position at the Nanyang Technological University, Singapore