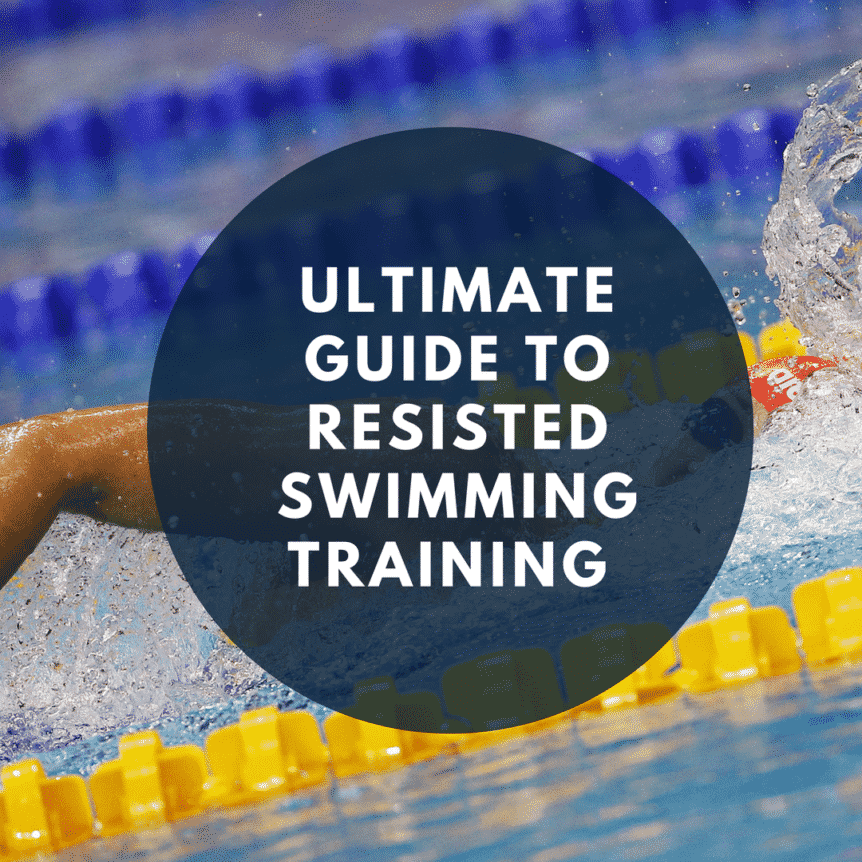 Resisted swimming is a common practice in the swimming community. Whether you’re using parachutes, buckets, the “rack,” or another device, you’ve probably done it before if you’re a competitive swimmer,.

I remember at Purdue, we used the rack and I loved it! ? It was challenging and different, I felt it helped me connect my stroke. Sure, this is anecdotal but whether it physiologically or psychologically worked, I felt there was a benefit.

Despite feeling it worked in college, once I began researching the topic, many questions popped up like:

Fortunately, I was able to talk with Dr. Vassilios Gourgoulis, Ph.D., a professor at Democritus University of Thrace in Greece.

These modifications during sprint resisted swimming caused an expected significant decrease in the mean swimming velocity. However, there were no substantial change in medial-lateral displacement and the relative pull length of the stroke. Moreover, there were no notable changes in the inclination (pitch angle) and the orientation (sweepback angle) of the hand, its resultant velocity, and the drag and lift forces generated by the hand.

Consequently, we did not observe any major modifications in the relative contribution of the drag and lift forces in the propulsive phases. The angle formed between the resultant force and the axis of swimming propulsion is not modified significantly during resisted swimming. However, in the pull phase, there was a decrease in the lift–drag ratio during resisted swimming. This shows that drag forces predominate against lift forces and the resultant propulsive force is aimed more in the forward swimming direction.

It could be concluded that the swimmers do not change their technique, at least with respect to the immediate effect of the sprint resisted freestyle swimming (Gourgoulis et al., 2010).

In a recent study, we also investigated the effect of an 11-week in-water training program. We evaluated the increased resistance on the swimming performance of young female swimmers with moderate performance level. We also monitored the basic kinematic characteristics of their freestyle stroke. We got positive results.

The 50, 100, and 200m front crawl swimming performance was significantly improved, without major changes in the stroke length and the stroke rate. Nevertheless, the stroke rate increased (although non-significantly) in almost all swimmers, resulting in an increased swimming performance (Gourgoulis et al., Ahead-of-Print). However, to my knowledge, there are no available scientific findings about the long-term effect of resisted swimming in more detailed kinematic characteristics of the stroke.

How do these changes amplify or change with greater resistance?

When swimmers perform sprint resisted swimming, the increase in resistance reduces the mean swimming velocity. This reduction is not attributed to a further decrease in stroke rate but to a further decrease in stroke length. This is because the stroke rate remains almost unchanged as the amount of resistance increased (Gourgoulis et al., 2010). Moreover, the duration of the separate phases of the stroke cycle is modified, increasing the index of coordination.

Swimmers tend to change their inter-arm coordination from a “catch up” toward an “opposition” mode, although their index of coordination remains negative. This change corresponds to a reduced lag time between the two arms’ propulsive actions and to a significant increase of the relative duration of the propulsive phases, suggesting higher propulsive continuity (Gourgoulis et al., 2013a).

As the added resistance increased from low to moderate and high, the resultant propulsive force is aimed more in the forward swimming direction, increasing the efficiency of the arm stroke (Gourgoulis et al., 2013b). Although this is not measured after the use of resisted swimming for a long training period, we speculate that this could be also a long-term effect of resisted swimming.

What biomechanical changes occur during the other strokes with greater resistance?

There are limited studies about the effect of resisted swimming in the biomechanical characteristics of various swimming strokes except front crawl.

A study we conducted shows a positive effect in 10m sprint swimming time in all swimming strokes after a 12-week in water sprint resisted swimming training (Mavridis et al., 2006). Although it was not measured in this study, we speculate that this positive effect was due to a more efficient application of the propulsive forces in the desired direction and an improved coordination between the propelling segments.

How can someone determine what resistance to start with while swimming?

There were no available research findings about this topic. However, it could be suggested that added resistance should not cause a remarkable decrease in the swimmer’s stroke rate, altering negatively the swimming technique to a great extent.

As the training specificity should improve with increasing swimming performance, I believe that resisted swimming is also helpful for elite swimmers. However, all previous relevant studies were conducted on swimmers with low to moderate performance level. Their results should be considered with caution regarding elite swimmers.

How should someone start using resistance training while swimming?

As mentioned, added resistance should not alter the swimming technique remarkably. Thus, at the beginning, it should be low and increased progressively.

All the different types of resisted swimming increase the added resistance that should be overcome by the swimmer. If the amount of the added resistance is the same, the results should be comparable. However, there are no comparative studies between the different types of resisted swimming and this could be an interesting topic for future research.

As you can see, resisted swimming needs more research. Like most swimming techniques, few studies have been done in general but really no studies have determined how different grades of resistance alter training.

Another vital component is how resistance swimming alters strokes other than freestyle. There are often few subjects in these studies, combined with the difficulty of blinding the subjects.

Remember, research should provide information for the coach to make an educated decision. Studies on resistance swimming haven’t found anything that is 100% set in stone. However, leading researcher Dr. Gourgoulis is quite confident it should be done by swimmers in all skill levels.