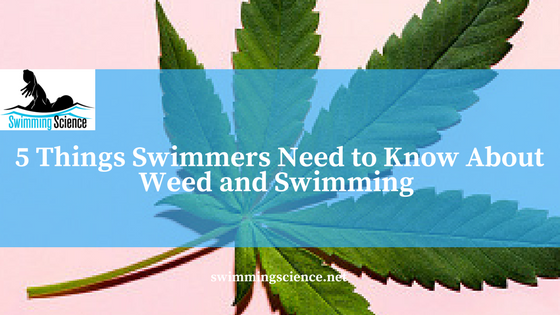 Let’s take a break from performance-enhancing drugs for a minute, and talk about a little bud instead. Michael Phelps is not the only swimmer to smoke weed, and he won’t be the last. He is just the one got caught. Is it safe to toke before you jump in the pool, or are you risking more than its worth? Before you blast a roach, let’s talk about weed and swimming.

Weed and Swimming: Use Among Athletes

The 420 Games is a series of events that aims to challenge the widely accepted notion that those who smoke weed are worthless stoners. The event, which is held in California, Washington, Colorado and Oregon, promotes “healthy and responsible use of cannabis,” through athletic achievement. Many of the participants in the 420 Games, which includes a 4.2-mile run, are retired athletes who claim weed improved or improves their performance and aids in dealing with the aftermath of career injuries (Worland, 2015).

Why Do Athletes Smoke Weed?

Why do so many athletes turn to weed? There are a number of reasons why athletes get high:

5 Things Swimmers Need to Know About Weed and Swimming

Before you light-up and jump in the pool, remember these 5 things about weed and swimming.

Yeah, that thing.  Cannabinoids are on the list of WADA list of banned substances. Prohibited items include Natural, such as cannabis, hashish and marijuana, or synthetic THC products, and Cannabimimetic (designer drugs) aka “Spice”.

It is important for athletes to understand the risk of using any kind of THC product, even certain hemp products. While marijuana is illegal to import into the US, hemp is not, and some hemp suppliers are unaware that there is detectable THC in their products. About $500 million worth of hemp products make it to the US every year, and many are sold as health and wellness products, and as supplements. Hemp is also present in many vegetarian dishes and food products. While it is not prohibited to use hemp products, the USADA warns that athletes should use hemp at his/her own risk. Testing positive for THC is, but it is not impossible and there are other factors that can determine whether or not THC is detected in an athlete’s system after consuming hemp.

2. You Can Face Suspension, or Worse – Removal from the Team

You must understand the school or team’s code of ethics policies before mixing weed and swimming. What happens if you are caught with weed or if you test positive for marijuana? Will you be suspended or face a complete removal from the team? If you don’t know, you should. Good luck bouncing back from a complete removal from the team. Few colleges and institutions will be willing to accept you to their teams.

We live in a social media culture, which means you are one post, one photo, or one tweet away from a career-killer. Here’s the thing: whether you take one hit or your smoke a jay with your friends, it all looks the same online. The problem is, when it hits the internet, you can’t get it back. Entire college swim programs have been shut down for years because of scandals that hit social media. Western Kentucky University is a prime example.

The munchies are real, and they can deal a blow to your weight-management goals. We have CB1 receptors in our bodies that respond to cannabinoids and cannabis. The CB1 receptors can cause athletes – or anyone else – to experience an increased appetite and cravings for high-salt, high-sugar, or high-fat foods. Too many binges can compromise an athlete’s BMI goal as well as replace healthy calories with empty calories.

There is no research to support the claim that smoking weed supports marginal gains in swim performance. In fact, studies show that marijuana impairs cognitive function. Long-term usage has been linked to diminished response time, compromised executive functioning, and reduced oculomotor skills (eye control and movement). If you want to improve your lap time, marijuana is probably not the way to go.

Consider the risks versus the rewards of using marijuana during training. If you are a competitive swimmer, combining weed and swimming isn't the best idea. It is critical that you understand the personal and professional risks associated with marijuana use before you light up.

Dr. John Mullen, DPT, CSCS is a World renowned expert and speaker in sports training and rehabilitation. He received his Doctorate in Physical Therapy at USC, as well as the Josette Antonelli Division Service Scholarship, Order of the Golden Cane, and the Order of Areté. At USC, he also performed research on strength training and rehabilitation. Dr. John has worked with multiple professional and Olympic athletes, helping them earn Olympic medals