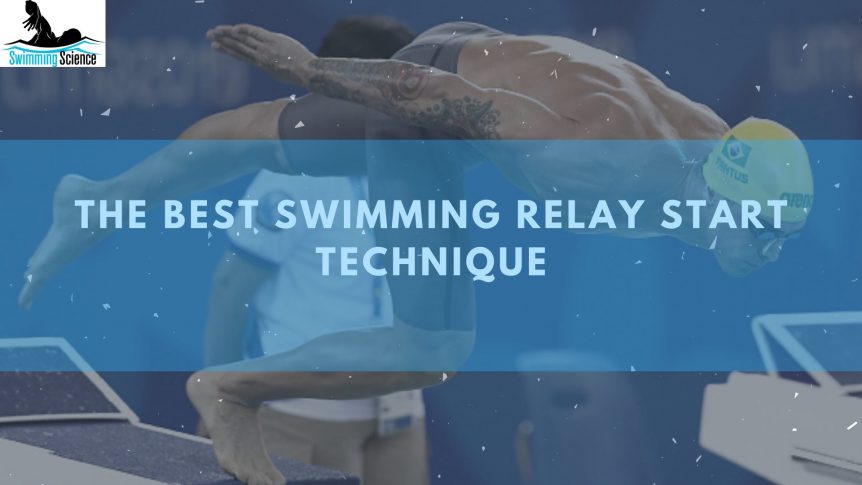 The relay exchange is a critical component of relays. Subjectively, you can watch a great relay exchange and watch the superior relay start make a significant improvement over their competitors. Yet, the ideal swimming relay start technique has garnered minimal research.

Like most aspects of swimming, research is often behind the elite swimmers. Coaches and swimmers are creative and can perform daily technical changes to find the fastest method for a technique, then figure out why later. Researchers need to have a theory, then test the theory. Therefore, the below research study will not analyze the Step-Over swimming relay start technique (see below, when they step over the wedge of the Omega OSB11).

As you can see, this style of relay exchange involves more athleticism and skills. Nonetheless, it should have the swimmer enter with more horizontal velocity, unfortunately, this is new style was not assessed in the below study.

Similar to swimming start, many in the swimming community associate a lower changeover time with a successful swimming relay start.

Saavedra et al. (2014) researched the relationship between changeover times and the corresponding relay race times for 13 years from international competitions (yes, 13 years) and concluded that changeover time was a determining factor for the overall race performance. However, Fischer et al. (2017) found that:

Not all of these swimming relay start techniques have been researched, but of the research previously done, there have been no significant differences between relay starting styles.

At this point, it remains unclear (from the current body of literature) in several ways which swimming relay start technique competitive swimmers should employ during relay races.

3 Flaws with Past Relay Start Research

A recent study (Qiu 2020) compared three different swimming relay start techniques in “eleven international youth swimmers (5 males and 6 females) 16.0 ± 1.29 yrs, height 1.67 ± 0.05 m, body mass 56.4 ± 6.88 kg, and FINA points 762 ± 31.03, were recruited as participants in the current study. All swimmers were national champions, belonged to the National Training Centre Squad and eight of them participated in the 2016 and 2017 European Junior Swimming Championships.”

The three styles used were:

After a standardized warm-up, the athletes performed a sprint 25-m for each of these swimming relay start techniques in a random order.

So, Which Swimming Relay Start Technique is Best?

Like most items in research, there was no statistically significant differences in time to 5-, 10-, 15-m or horizontal take-off velocity, but

an observed trend for the one-step start to be superior to the non-step techniques.

Despite the above findings, here were the differences 6 main findings:

Based off the results of this study, there is no significant difference in swimming time or horizontal velocity in relay start techniques. However, there is a trend towards the step relay start and previous data by McLean et al. (2000) which indicated the relay step-up did not result in a significantly faster 10 m start times, and that the differences between no-step and step starts was close to 0.09 seconds.

Clearly, more research is needed and information regarding the preferred style of a relay start, but overall it seems the step-up style results in greater horizontal velocity and faster times, it just isn’t significant. This is in alignment with expert observation, as most elite swimmers used this style of relay start.