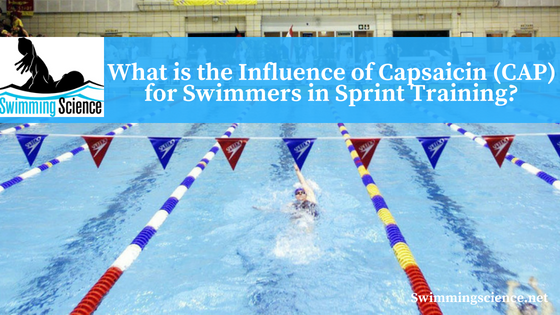 Background on CAP for Swimmers

The ability to perform repeated sprints with minimal fatigue is important for swimming training and competitions with multiple events with minimal rest. Supplements are an enormous industry, commonly projecting breakthrough supplements to improve performance.

IL-6 is a cell signaler (cytokine) with both pro-inflammatory and anti-inflammatory effect, which may be important in the recovery process, but extended elevations may impair recovery.

CAP is a major component in hot peppers which give the fruit a distinct flavor and is commonly prescribed for weight loss and aiding digestion.

The purpose of this study was to determine the influence of capsaicin (CAP) on the performance of and the interleukin-6 (IL-6) response to repeated sprints.

Nineteen experienced male athletes participated in a placebo-controlled crossover study. During one trial, they consumed 3 g/day cayenne (25 mg/day CAP) and the other day a placebo for days.

In short, CAP increases GD without any improvement in performance of anti-inflammatory response.

This study does not suggest any benefit from capsaicin supplementation for improvement in performance or volume of anti-inflammatory response for repeated sprints.